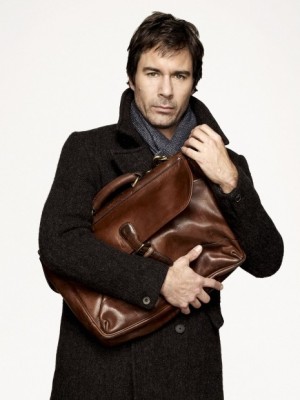 TNT has renewed their freshman TV series, Perception, for a second season of 13 episodes. They’re expected to begin airing sometime in 2013.

Starring Eric McCormack, the show debuted on July 9th to a 0.9 rating in the 18-49 demographic with 5.6 million total viewers. The ratings have come down since then but the five episodes that have aired thus far have averaged a 0.8 in the demo with 4.66 million.

There are five installments yet to come with the season finale slated for September 17th.

TNT has ordered a second season of Perception, the hit Monday night drama starring Emmy(R) and Screen Actors Guild Award(R) winner Eric McCormack (Will & Grace, Who Is Clark Rockefeller?). Perception comes to TNT from ABC Studios and currently ranks second behind TNT’s Major Crimes among basic cable’s top new scripted series for the year-to-date. The network has ordered 13 episodes for season two, which is slated to air in 2013.

“Perception has captured the imagination of TNT’s audience of armchair detectives with wonderfully intricate cases, emotionally charged situations and, of course, a terrific cast led by Eric McCormack,” said Michael Wright, president, head of programming for TNT, TBS and Turner Classic Movies (TCM). “Daniel Pierce is a truly unique and fascinating addition to television’s pantheon of crime solvers. We look forward to seeing where Perception takes us next.”

TNT’s Perception, which airs Mondays at 10 p.m. (ET/PT), centers on Dr. Daniel Pierce (McCormack), an eccentric neuroscience professor with paranoid schizophrenia who is recruited by the FBI to help solve complex cases. Rachael Leigh Cook (She’s All That) stars as FBI agent Kate Moretti, Pierce’s former student who asks him to consult on her cases. The cast also includes Arjay Smith (The Day After Tomorrow) as Max Lewicki, Pierce’s teaching assistant, and Kelly Rowan (The O.C.) as Natalie Vincent, Daniel’s best friend and every bit his intellectual equal. In addition, award-winning actor LeVar Burton (Roots, Star Trek: The Next Generation) plays Paul Haley, a dean at the university and Pierce’s friend.

ABC Studios, part of ABC Entertainment Group, develops and produces compelling programming for both broadcast network and cable television as well as digital platforms. ABC Studios has delivered some of the most successful, talked-about and evolutionary series on television such as Desperate Housewives, Grey’s Anatomy, Lost, Criminal Minds, Army Wives, Once Upon a Time, Scandal and Revenge.

TNT, one of cable’s top-rated networks, is television’s destination for drama. Seen in 99 million households, TNT is home to such original drama series as Rizzoli & Isles, Falling Skies, Dallas, Perception, Major Crimes, Franklin & Bash, Leverage, Southland and the upcoming Monday Mornings. The network also features dramatic unscripted originals like this summer’s The Great Escape and the upcoming Boston Blue (working title) and 72 Hours (working title). In addition, TNT is the cable home to popular dramas like The Mentalist, Bones, Supernatural, Las Vegas, Law & Order and Castle, which starts this year; primetime specials, such as the Screen Actors Guild Awards(R); blockbuster movies; and championship sports coverage, including NASCAR, the NBA and the NCAA Division I Men’s Basketball Championship.

What do you think? Are you glad to hear that Perception has been renewed for a second season?

I love this show. It ought to be renewed.

This is the most brilliant show on tv!!! So nice to have something filled with such intelligence! Wish it were on all year long!

Just started to get into it. I like it !! give it a chance.

I love this show! It’s such a great melding of the quirky and the factual. Lots of interesting tidbits that are fascinating.

Great, I love this show

I DVR’d this and am just about to watch now. Thank you for keeping an original and interesting show on the air:) about to press play….

YES…YES…YES…. Am so pleased Perception has been renewed for a 2nd session! This is a clean, funny, brain-working and SUPER great entertaining show!