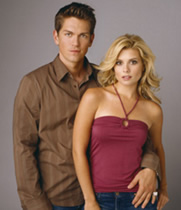 Even before the CW’s official word came down that Reba McEntire’s popular sitcom Reba was being cancelled, there were rumors that the show might continue — either on another network or in the form of a spin-off. Will either be happening? Sadly, no.

There were rumors that cable channel Lifetime (that airs Reba in syndication) was interested in a doing a spin-off featuring Van (Steve Howey) and Cheyenne (Joanna Garcia). Van & Cheyenne would be in their own home and with their young family and other former Reba castmembers would stop by as needed (or as the budget would allow). While there’s no official word that the spin-off was ever seriously being considered, it seems pretty certain that it won’t be happening. Both Howey and Garcia have just been cast in new series pilots.

Howey has been cast as the lead in a new sitcom called The Beast. It’s based on a British series that was created by Simon Nye. Howey will play a charming and womanizing veterinarian who hates animals but loves meeting their female owners. Its under consideration by FOX for the Fall season.

). The ensemble sitcom centers around an aspiring filmmaker (Kranz) who moves into an old Hollywood apartment building populated by wacky neighbors. CBS is considering the series for midseason.

Could Reba be picked up by another channel, even without Howey and Garcia? Though Reba’s ratings were quite good when compared to other CW series, they aren’t impressive enough to attract another network. The show would also likely be too expensive for a cable channel like Lifetime.

In a recent press conference to promote her music, Reba McEntire talked about Reba and the possibilities of a return. The series star and executive producer said, “It won’t be shopped to another network. And it’s very sad that it’s over because it was a very positive show to watch, that the whole family could watch together.”

“But we did a wonderful six years, had a great run and we’re very thankful for that. I hope some day to get to do another sitcom and to do television again. I hope that I’m blessed enough to where it’s that [kind of] ensemble, that family, where we all got along. It’s very upsetting to know that you’re not going back to work. It wasn’t work. It was fun. We played. We had the best time. And our writers were great. Everybody on the whole team was just super to work with. It was just a huge family and I’m going to miss ’em. We do stay in touch but we just don’t get to go in every morning at 9:00 and get to play like we did.”

With her unique brand of humor, let’s hope Reba doesn’t stay away from the small screen too long. How about a cameo on The Beast or The Captain? Stranger things have happened. Stay tuned!

WHY WON’T THEY BRING REBA BACK THIS MAKES ME SO MAD!!!!! TOO MANY PEOPLE LIKED THAT SHOW TO STOP IT AND AT THE TOP THEY SAID THEY WONT CONTINUE IT WHY? WHY? I NEED TO KNOW! I LOVED THAT SHOW AND THEY CAN’T JUST TAKE AWAY SOMETING I LOVE! ALL I HAVE NOW ARE REPEATS AND I WANT MORE! REBA PROBABLY HAD FUN DOING THE SHOW AND LIKED EVERYONE ELSE ON THE SHOW! YOU BETTER BRING IT BACK! YOU BETTER AND YOU WOULD IF YOU SAW THE LOOK ON MY FACE!!!!!!!

I just recently began watching Reba and just recently got a computer from my daughter. So in surfing the net, I found the news of the cancelation. I am a shut-in and disabled. There is not much to look forward to in my life, and they say that laughter is good for you. She is the only person that I really could laugh at, to or with. I live in a small town in SE Nebraska, our population is 475. I can’t even get the reruns on tape. I haven’t seen any shows where BJ has lost weight and I… Read more »

I don’t want no spin-offs I want Reba!

Why would you cancel a show that is so popular. Although I am a big country music fan, I was not a Reba fan until my granddaughter got me to watching the show with her. She is 7. It is a good clean family show. Maybe thats the problem huh? We sure will miss it…

I cant believe that reba got cancelled. it’s the only show that my mom, my sisters, my neices and i watch. there are so many episodes that make me cry. the cast is perfect together, very touching, funny and real. I dont really watch any other shows. PLEASE BRING REBA BACK

I am a recent fan of REBA, and have purchased all available DVDs. This show was clever, humorous, and thughtful in dealing with modern dilemmas. The characters were wonderful. Too bad it was cancelled because there are many more situations to cover in REBA’s fashion: clever, thoughtful, and very funny in a way that was not mean.

I just wanted to say that I love REBA!!!! Thank God that LIFETIME network broadcasts her show for 2 hours each day. I work hard all day and look forward to coming home and watching her show. The entire cast is amazing and they keep me laughing! The show needs to be picked up again!!

I can’t believe they have cancelled Reba I just recently started watching the show with my son. How sad it is to know that every family show gets cut while all the others keep coming. When will this tv producers ever get it straight. They don’t make them like they use to. Like Full House, Growing Pains, Reba, 7th Heaven they need more shows like this.

I just read that the Reba show had been cancelled and I actually started to cry. I love that show so much, they all make me laugh so hard and I always looked forward to watching it every weekend. It will be sadly missed and I hope that maybe they will bring it back with all the same cast…

I hate that they canneled reba its was the top rated show why would they do something stupid like that… if it got a high rated why would you cancel it i mean come on. isnt it about high rates and stuffi miss it i always watch the repeats though but i miss new ones i wish and pray that they will bring it back someday soon SOONER THEN LATER!

We’ve been watching Reba’s show since the first episode. Now every evening we watch the re-runs. It was one of the few good clean family shows left on TV. I really regret that you felt you had to pull the show. There are a lot of us out here that don’t care for the content of many of the newer shows. We like real comedy, not bad language. We like good family shows, that portray exactly what Reba’s show did. There is a whole other type of audiance you are missing the boat on.

I am so disappointed in the decision to cancel Reba. It has truly been one of the most enjoyable shows on
T.V. I love to watch it and it always makes me laugh. It is truly a feel good, clean an funny family show. Please do not cancel REBA. What will I watch now? Syndi

SOOOOO sad that one of my favorite shows is now gone. The “Reba” Show is (was) so fun and so true to life. We have several grandchildren in the family that started Reba’s way. I am always curious how she handles the situations. We have divorce and step kids and 1/2 siblings as well. I will miss the advice and good hearted fun and love they shared. I also truly miss Dharma and Gregg and 3rd Rock from the Sun too. Please bring them back too. My boyfriend is wondering if Battlestar Galactica will be back as well.

I Love Reba McEntire and i also love her show i just wish that lifetime would put the new episodes on the air for us who dont have the cw. I m sure she will find her way back into tv again.

THERE IS ONLY A VERY FEW SHOWS ON TV THAT ARE CLEAN FOR A FAMILY TO SIT DOWN AND WATCH AND THE (BOSS) IS NOT HAPPY WITH IT SO THEY PULL THE PLUG ON THE GOOD ONES,(WHY) RBEA IT WAS CLEAN A FAMILY SHOW,AND THE TOP RATED SHOW YOU ALL HAD,
BOY PULLING REBA WAS ONE OF THE WORST MOVE A PERSON MADE PLEASE PUT HER BACK OR RUN MORE OF HER RERUNS,