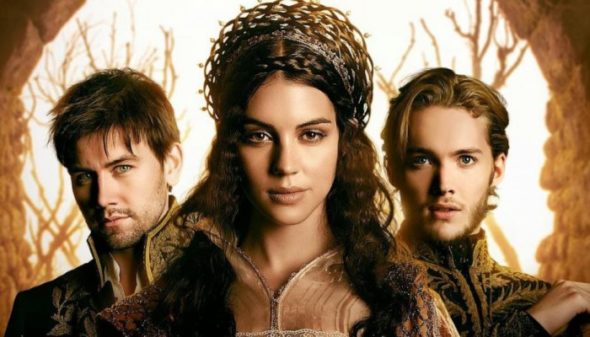 Devastated that this show is being canceled! I’ve loved this show from the beginning. Wonderful acting, scenery, music, the clothes, etc. etc. And so wonderful to have a show with interesting history behind it.

Why do they always have to cancel the good shows? I love the history of Reign and will be sad to not get to see more.

Hate to see the show canceled. Hopefully Netflix or another station picks it up. All good actors. Wonderful show and to good to cancel.

I really love watching Reign. My daughter got me watching it and I don’t like to miss an episode! Wish they would reconsider canceling. Justmove it to another channel! I have read so much history since watching the show and starting doing family geneology because of my Dudley heritage.

I really love the show Reign and I hate that it’s been canceled by the CW!! I wish they were reconsider canceling . Please, please let another network pick up the show! It’s one of the few clean shows that are left on TV good history and excellent acting!

I hate that Reign was Cancelled by CW!!!!

I hope another network picks up this show. I just love it.. well done..

A great show to get kids into history, I liked it and the sets and actors.

I am binge watching this show on Netflix. Love it! Amazing acting!

So sad. I love this show

Sad, bad, crappie! Loved from the start. Not surprised, sadly. From its exquisitely lavish appearance -in every way- figure it must cost a fair bundle to make. Knowing the unfortunate ratings, & the politics about same… Ado. Beautiful work by ALL evolved. Thanks so much for the terrific work.

Love this show. It is tastefully preformed without too much violence or nudity to other shows out there. Sad to see it will end. More shows should be like this one.

We have enjoyed the Reign and are very sorry to see it go! Wish Netflix would pick it up as it has done before.