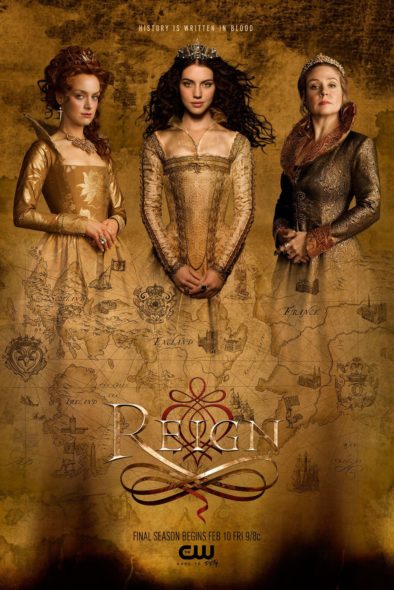 When will Mary Queen of Scots meet her fate? Has the Reign TV show been cancelled or renewed for a fifth season on The CW? The television vulture is watching all the latest cancellation and renewal news, so this page is the place to track the status of Reign season five. Bookmark it, or subscribe for the latest updates. Remember, the television vulture is watching your shows. Are you?

Airing on The CW television network, Reign follows Adelaide Kane as Mary Queen of Scots. In the wake of the death of her husband, Francis II, King of France (Toby Regbo), and the execution of her lady-in-waiting, Lola (Anna Popplewell), Mary vows to take the throne of Elizabeth I (Rachel Skarsten). The cast also includes Megan Follows, Celina Sinden, Craig Parker, Rose Williams, Charlie Carrick, and Ben Geurens.

The fourth season of Reign averaged a 0.20 rating in the 18-49 demographic and 698,000 viewers. Compared to season three, that’s down by 32% in the demo and down by 28% in total viewers. Learn how Reign stacks up against the other CW TV shows.

The Queen is dead. Long live the Queen! Ironically the Reign TV show, which has displayed little regard for history, soon itself will be history. To give this cancelled TV show its due, Reign was a cheesy fun romp with extra cheese. This sort of guilty pleasure is not good for one’s cholesterol levels, and yet, I cannot resist.

What do you think? Was the network right to cancel this TV show after four seasons? Do you think The CW should have renewed Reign for season five, instead?

Can we start a petition to bring this back? Series 4 ending could be a dream or foreshadowing. It should be advertised for a new crop of younger viewers on Netflix.

Please bring it back! It is great Covid relief!!! The show was getting better with each season. I’m sure many viewers have mourned the loss of the actors who played Francis and Lola (Toby and Anna). They were both excellent and added a great deal of depth and substance to the series. Viewers need more time and development of new characters to fill that void. Adelaide is fantastic as Mary as is Rachel playing Elizabeth… and who wouldn’t love the plotting of Catherine and Narcisse? Please at least bring the show to some logical conclusion… to leave us on the… Read more »