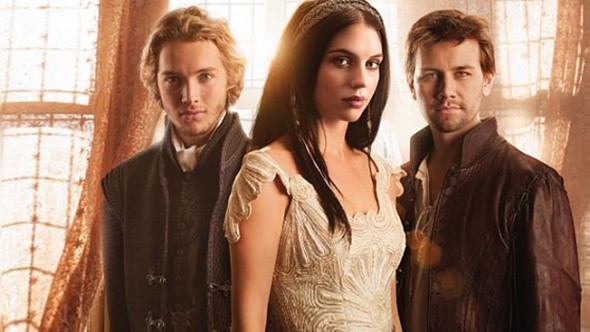 I love this show ,CW cancelled the show now it’s time for me to cancel CWBecause the rest of show on there is crap

I am really disappointed that CW will be dropping Reign from it’s programming. I can’t believe they would rather drop Reign than some other shows that are not even half as good (I-Zombie, Crazy Ex-Girlfriend, etc.) Even though the show is of course somewhat fictionalized there’s so much more history related to the story that they could easily keep it going for more seasons. It is the one show I completely looked forward to watching on CW. I love the story, characters, costumes, the whole thing! I truly hope CW and the producers have a change of heart and do… Read more »

I hope CW and the producers of Reign reconsider and bring the show back. It’s definitely the best show on CW. I can’t believe people would rather see Reign cancelled than dumb shows like I Zombie, Crazy Ex Girlfriend, ect. – these shows are not even funny, they’re dumb. It seems there’s so much more they could go into history wise to be able to continue the show. I love the cast, the story, the costumes, the whole thing! Please don’t cancel it!!

This is one of my favorite shows as well. As JLI said the only show on CW she watches, well me too. I enjoyed the scenery, the locales I would never have the opportunity to visit. The costumes are beautiful. I also think the writer’s have stayed with the real story, just embellishing. My only hope since it is TV we do not have to see Mary killed as she was in history. Since she has had a tortured love life, let it end with her becoming Mother and the man she loves Bothwell.

I was really disappointed of learning of cancellations after just recently tuning in to the Netflix episodes and binge watching all of them..loved this series . Didn’t know it was on cw don’t have the schedule to keep up with cable shows

I’m sorry that the CW cancels some of the best series there are…and the reviews are so low..but yet people enjoy shows with a bunch with absolutely no meaning…this is partly based on true events yet it is not appreciated..it’s regal and scary and interestingly real at the same time..yet people prefer to watch a bunch of zombies and gore and killing with no legitimate backstory…so it stems from society as well..if allowed to continue this show would have definitely brought some serious action and good plot twists as we know it does, especially if it followed along the lines… Read more »

This is my favorite show!! And the ONLY CW show that I’ll even watch. They Always cancel The Best shows. So much for this Network. I won’t be watching after Reign is over. Sad. 🙁

I wanted Francis to come back and to be happily with Mary again and end good !! I want a happily ever after with Mary and Francis I fell Inlove with them two

The historical Francis died when he was 17 years old. The way he died in the show i dont think it was exactly the same as he died in real life.

I hate politics… I look forward to Reign every Friday night… they cancel all the great shows.. ridiculous

This was a good show. I felt from the beginning though it strayed so far from the historical truth that it probably would not last a really long time. I do think had they stayed closer to truth they could have had a much longer run and possibly been picked up by History channel.

I love this show and can’t wait to see it every week. To me it is the best one on tv. It has everything and is not terribly violent and evil. Mary / Adelaide is great and the costumes are fantastic. Why cancel such a good show and keep airing trash like I Zombie, Grimm, etc? Please continue Reign.

I love this show and am sad to say goodbye.

So sad to see reign will no longer be on anymore why are they cancelling all the good shows.

This show was done so well! The casting was superb and the costumes were breathtakingly beautiful, and the story line was so good, I couldn’t wait till the next week. I am sad to see it go but so glad it will be given a proper ending! I give you all a standing ovation!