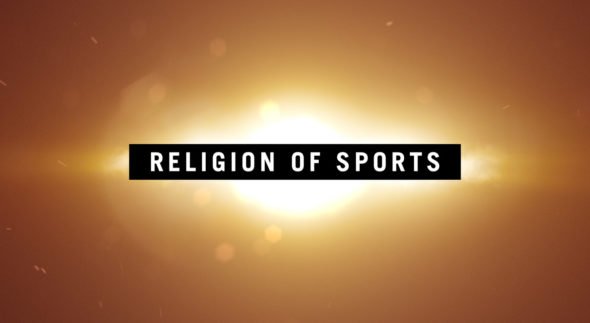 It is almost time for a second season of Religion of Sports. The new season will launch in November.

AT&T Audience Network revealed more about the return of this series in a press release. Check that out below.

“Following a successful debut season, AT&T* AUDIENCE(R) Network will kick off the second season of its original documentary series Religion of Sports Nov. 15 at 8 p.m. ET/PT.

Each episode takes viewers around the world to examine untold stories of sports. It gives an in-depth look at stories celebrating the transcendent nature of sports and their influence on society.

Season 2 kicks off with the fascinating story of soccer team FC Lampedusa. International refugees now living in Hamburg, Germany’s St. Pauli district make up most of the team.

The episode will air at the Tribeca TV Festival, presented by AT&T. It details the social responsibility the club feels for its city and members. It also bridges sports with an important, relevant social issue – immigration. The team and its fans regularly take their passion beyond the field by participating in protests against social injustices to bring about change.

“Season 2 of Religion of Sports will showcase sports stories viewers may not be aware of, but they’re stories that have a profound effect on cultures, countries and people from around the world,” said Chris Long, head of the AT&T AUDIENCE Network. “Tom, Michael, Gotham and I are proud of the team’s effort to bring these stories to life. We want to highlight cultures unknown to the mass consumer, which has been rewarded with a viewing at the Tribeca TV Festival.”

Season 2 of Religion of Sports also details a variety of topics and stories. See episodes on:

Baseball at San Quentin – Follow the powerful journey of 3 inmates at San Quentin. Each seeks hope and redemption by redefining their lives through the prison’s baseball program.

Fencing – Profiles Peter Westbrook, an Olympic medalist who went on to open the Peter Westbroook Foundation in Brooklyn, New York, to bring fencing to the inner city and underserved communities.

RAAM Race Across America – Follows bicyclist Sarah Cooper as she attempts to break a time record in completing RAAM’s Race Across America. The single-stage, ultra-cycling race starts in Oceanside, California and ends in Annapolis, Maryland.

New Zealand – Delves into the history and customs of the Maori people and the cultural influence on the New Zealand All Blacks rugby team.

Are you a fan of Religion of Sports? Will you check out season two? Tell us what you think.