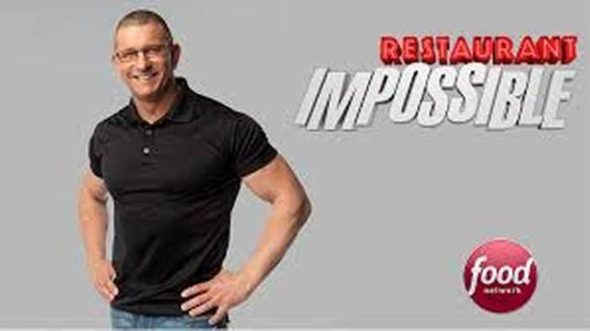 Restaurant: Impossible has been renewed, and a spin-off series, Restaurant Impossible: Back in Business, is coming next week. Both series come from author and chef Robert Irvine who just signed a new two-year deal with Food Network.

The cable channel revealed more about the renewal and spin-off in a press release.

This two-year deal includes new episodes of the long-running, hit show Restaurant: Impossible, as well as additional content developed by Robert Irvine across the Discovery portfolio, with mid and short-form projects for both linear and digital platforms, including the Food Network Kitchen app. A culinary staple of Food Network, Robert will also continue his quest to help struggling restaurant owners across the country in the new spinoff series Restaurant Impossible: Back in Business, which premieres Thursday, July 30th at 9pm ET/PT.

In the aforementioned series, Irvine helps previously featured restaurants affected by the current pandemic. The series will be accompanied by an all-new after show with Robert and other members of the RI family going behind-the-scenes of each episode and answering questions from fans.

The most recent season of Restaurant: Impossible has been a hit with fans both on-air and online with L3 ratings up double-digits for P25-54, W25-54, and up triple-digits for M25-54 vs. year ago benchmarks, and social media interactions up 25% vs last season. Complementary content for the series has garnered over five million video views across social media platforms to date, with #RestaurantImpossible trending on Twitter during seven of the season’s 10 premieres.

“Robert Irvine’s tireless commitment to helping restaurant owners in need, along with his passion and support for service members and first responders has made Robert a fan favorite over the years,” said White. “I could not be more excited for Robert to remain in the Food Network family, as he continues to captivate viewers with the Restaurant: Impossible franchise, along with delivering future projects that are sure to help and inspire.”

“I’m beyond grateful to have had Food Network as my professional home for so many years – and positively thrilled that our partnership will continue for the foreseeable future,” said Irvine. “The biggest thanks, however, I reserve for our fans, whose enthusiasm and support make it all possible. We have a lot of work to do, with more restaurants than ever needing a helping hand. Now let’s get to work!”

What do you think? Are you a fan of Robert Irvine’s series on Food Network? Will you check out the new show?

Wonderful show! My wife and I love Robert’s New show (and his past older shows as well!), and also All of the cast, builders and designers that are working with Robert. So glad his show was renewed and we are looking forward to more New adventures and restaurant rescue missions Robert has in store. ~ Marc

I am a fan of Robert. He is a very talented chef. His dinner impossible was a great series. The Restaurant Impossible carries the same theme of Robert making things better. The catchup new series looks like a good way to follow up on the places Robert has helped before.

I’m i’m not a fan of Restaurant Impossible But I am a big fan of Hotel Impossible on the Destination America channel, which was canceled a few years ago. I wish they would bring that back.

0
0
Reply
I much prefer Hotel impossible, which was canceled

I much prefer Hotel impossible, which was canceled a few years ago. I wish they would bring that back. Not fond of restaurant impossible.

Enjoy the interactions and transformation!