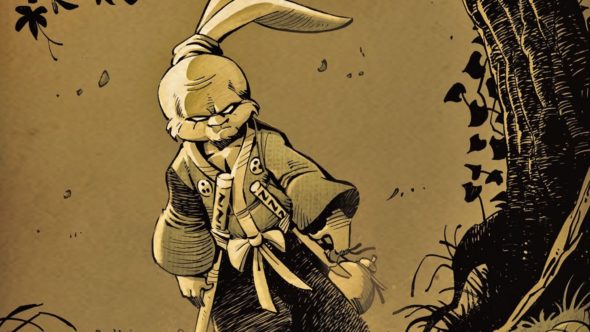 Samurai Rabbit: The Usagi Chronicles has been ordered by Netflix. The series is an adaptation of the comic book, title Usagi Yojimbo by Stan Sakai. The new animated show follows the teenage Rabbit Samurai Yuichi, descendent of the great warrior Miyamoto Usagi, on his epic quest to become a true samurai.

The series takes place in the far future, set in a world that mixes modern high-tech images with classic Japanese references. It follows the teenage Rabbit Samurai Yuichi, descendent of the great warrior Miyamoto Usagi, on his epic quest to become a true samurai. But he isn’t alone! He leads a ragtag team of misfit heroes – including a roguish bounty hunter, a cunning ninja, an acrobatic pickpocket and a faithful pet lizard – as he battles depth-charging moles, metal-tipped winged bats, and monsters from another dimension, all in the pursuit to become the best samurai Usagi!

What do you think? Will you check out this new animated series?  Have you read the Usagi Yojimbo comics?

I remember the character from episodes of Teenage Mutant Ninja Turtles (TOS), so this COULD be interesting

We enjoy Netflix very much have for a long time. There are some really great shows as well really horrible shows. We would like to see New LGBTQ+ movies as they have had the same for over a year. Having children who are of LGBTQ+ we enjoy watching movies with them. We no longer watch Disney or anything with Disney being a part of. Simply do to their so called”family” values. Hope Netflix reads this and or anyone working there.