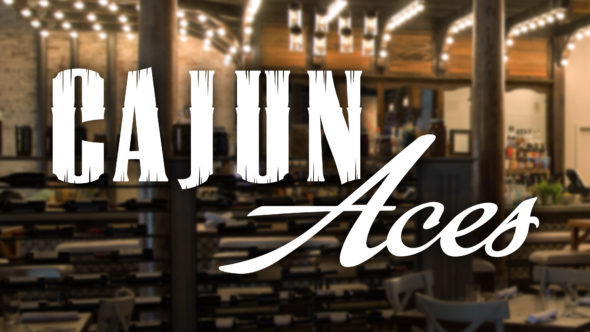 Food Network is headed to the bayou. Recently, the network announced the premiere date for their new TV show, Cajun Aces.

The cooking show follows Cody and Sam Carroll “as they share recipes rooted in their Cajun background, while showcasing delicious and easy recipes at home without sacrificing flavor.”

NEW YORK – August 16, 2018 – Sam and Cody Carroll are two young and talented chefs who own and operate a pair of Louisiana restaurants while also running their family farm. Add in one adorable daughter, and you get an idea of how busy life can be on the new series Cajun Aces, premiering Saturday, August 25th at 12pm ET/PT on Food Network. Join Cody and Sam over six episodes as they share recipes rooted in their Cajun background, while showcasing delicious and easy recipes at home without sacrificing flavor. From the kitchen on their family farm, Sam and Cody make dishes that are just as tasty as their restaurant favorites, but done with simple ingredients filled with love for family and friends.

“Sam and Cody bring their rich Cajun recipes and culture to Food Network with sweet and savory dishes perfect for any occasion,” said Courtney White, General Manager and Executive Vice President, Programming, Food Network and HGTV. “While running two restaurants and tending to their farm is no easy feat, these Cajun Aces do it all with aplomb, inspiring viewers to create their own traditions along the way.”

In the premiere Sam and Cody celebrate Friday night at home with a Southern Louisiana tradition – a fish fry. They have the perfect menu featuring Thin Cut Catfish with Spillway Sauce, a locally-grown Farmer’s Caviar Bean Salad, and a fruity rum mix called Fish Camp Punch to wash it down. This party is going to be right next to the pond on the family farm, and front and center will be Sam’s Chicken Thighs and Smoked Sausage Gumbo served with Creole Potato Salad, perfect to serve in the same bowl as true Cajuns know. Other episodes during the season feature Cody and Sam planning an entire family dinner using cast iron pot recipes, including Sam’s Shrimp and Corn Soup and Maque Choux Skillet Cornbread; Cody and Sam serving up a quick and Big Easy brunch on the farm using a few time-saving tips; and Sam and Cody perfecting the art of tailgating, with their Sugarcane Smoked Wings with Cane Row BBQ Sauce and Rosemary Ranch. Don’t miss Sam and Cody all season long as they prepare delicious down-home recipes and add a little Cajun flavor into your life.

Get to know these Cajun Aces, Sam and Cody Carroll, and find recipes from the show at FoodNetwork.com/CajunAces. Tell us about your favorite dishes using #CajunAces!”

What do you think? Are you a fan of cooking shows? Will you check out Cajun Aces?