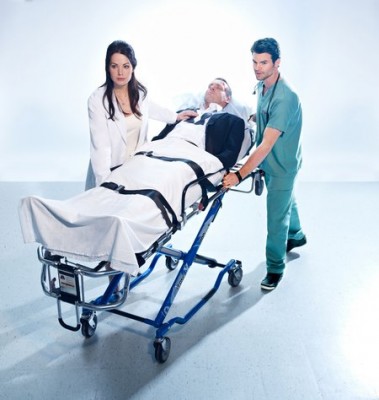 TV show description:
Charlie Harris (Michael Shanks), the charismatic Chief of Surgery at Hope-Zion Hospital, suffers a massive brain hemorrhage on his wedding day and ends up in a coma. This leaves the hospital in chaos and his fiance, fellow surgeon Alex Reid (Erica Durance), in a state of shock. Along with a newly arrived star surgeon named Joel Goran (Daniel Gillies), Alex races to save Harris’ life. While comatose, Harris explores the hospital halls in “spirit” form, sees it from an outsider’s perspective, and isn’t sure if he’s a ghost or is just dreaming.

Alex is brilliant and quick-witted — an excellent general surgeon who believes completely in her scientific training. It’s a new experience when she finds herself as the loved one of a patient. It leaves her feeling vulnerable and under great pressure. It doesn’t help matters that her former boyfriend, Goran, has joined the staff.

Goran is a brash superstar orthopedic surgeon who doesn’t shy away from confrontations. He left a prestigious position at Sloane-Kettering to come to Hope-Zee and work with Harris. With Harris is in a coma and his ex in the most vulnerable time of her life, he can’t admit that he’s still in love with Alex. He also can’t bring himself to commit to Maggie Lin. Time will tell if he sticks around or runs away, as per usual.

Dawn Bell (Michelle Nolden) is Harris’ ex-wife and a respected cardiologist. She calls into question Alex’s ability to make the right decisions for Harris and is smart, sexy, and sometimes likable.

Like Alex, Tom Reycraft (K. C. Collins) is also a fourth year surgical resident and has his eyes on her position as Chief Surgical Resident. He can come off as crass and cavalier, but he is a talented general surgeon.

Gavin Murphy (Kristopher Turner) is considered Hope-Zee’s smartest resident. He’s perceptive, ethical, slyly sexy and has a special interest in psychiatry. He’s sharply observant about other people’s emotional lives but can be a bit clueless about himself.

Maggie Lin (Julia Taylor Ross) is a fun and sexy surgical resident who’s smart but uncertain. She’s often ruled by her emotions and has a secret that could jeopardize her future. Maggie finds herself charmed by Goran, while she overlooks a potential good thing with her pal Murphy.

Dr. Zach Miller (Ben Ayres) is Hope Z’s ER Doctor. He is a devout Christian and family man but his marriage may be in crisis. His job is his calling as he truly believes he is doing God’s work by saving lives. Confident and compassionate, he leads what can be a very hectic ER.

Shahir Hamza (Huse Madhavji) is a genius neurosurgeon who’s lacking in people skills. He may have mild Asperger’s Syndrome or may just be too intelligent to relate to regular people. Either way, he frequently finds himself in conflicts with his co-workers and patients. Hamza is openly gay and is in a committed relationship with OR nurse Victor Reis (Salvatore Antonio). Reis an extrovert and likes to mix and mingle. Their relationship is put to the test by Hamza’s emotional limitations.

Melanda Tolliver (Glenda Braganza) is an ICU doctor as well as Alex’s best friend. She oversees the day-to-day care of the hospital’s most critically ill patients including Harris. Working in intensive care, Melanda has to be both companionate, and tough as nails. Jackson Wade (Joseph Pierre) is an ICU nurse who works with Melanda and never loses his great sense of humour.

Alex and her fellow doctors continue to work to save Harris and the other patients at the fast-paced hospital. Daily, they must make complicated and courageous decisions in their struggle to keep hope alive.

Series Finale:
Episode #85 — Hope Never Dies
Alex, Charlie, and Luke get into a car accident after a heroic moment, throwing their whole family into peril. The doctors of Hope Zion struggle to save their lives, while also dealing with the chaos of a mass casualty incident. When they fail to save Charlie’s life, his organs go to many of the accident victims, saving several lives. The Hope Zion family bands around Alex while mourning Charlie, reinforcing she will never be alone, despite the loss of her partner.
First aired: August 8, 2017.

What do you think? Do you like the Saving Hope TV show? Do you think it should be ending? Would you have watched season six?

Yes I would have kept watching if Charlie would have lived, but you guys kinda made that impossible now by giving all Charlie’s organs to other people. I’m sorry but that was a horrible way to end the TV series!! After all that time of keeping them apart & finally getting them back together with another baby on the way it just should have ended better!

PLEASE BRING BACK SAVING HOPE. BEST TV SERIES. WHY WAS IT CAANCEL? SO MANY QUESTIONS GO UNANSWER!!! LOVE THIS SHOW!

1st off yes I would’ve watched season six if there was one, this was a great show and it was wrong to leave us hanging. Yes Charlie died but his spirit always stayed close to Alex his forever love. How can u end a show like this one without knowing if Alex would’ve held onto Charlie for all them years and the children I think should’ve been shown growing up after all u had it end that Alex died not showing how or why and it was 50 years that past. Please renew this show I’m sure so many ppl… Read more »

I hope Charlie is not leaving or any one else. Keep them whatever you have to do. They are all great actors.

please put saving hope back on the air. I miss watching it. The only thing I did not like was all the sexual crap. They don’t need that in this show. It is good just as is and they can get many ideas from real people and their situations when they were in the hospital etc. PUT IT BACK ON!

This is the best show I have followed for my entire 66 yrs of TV watching & now you are cancelling? Why? I am just ill when I heard the news. Please explain? Please bring it back!

I believe they should’ve kept the show going, would be nice to see the baby and hope that Charlie would come back to Alex as a ghost, I really liked this show please bring it back.

I love watching saving hope I with they will bring back on .sad they kill off Charlie. Alex and Charlie should be together

I am dismayed that it is cancelled. Not for lack of interest, I’m sure. Very intelligent scripts and finely acted. Best wishes to the cast and the crew on fruitful outcomes.

Very sad that Charlie got killed off unless they are planning on him coming back as a ghost. I really loved this show when I found it on hulu. Some shows are way too good to end but then again, like everyone else has said, “The good ones usually do get canceled.” Maybe hulu or another one will take it on and keep it going.

When a good show comes on; it usually doesn’t last long. I’m surprised that saving hope aired five seasons. I loved every show. Too bad they had Charlie die in the last show; should have shown that Charlie, Alex, Luke and baby lived happily ever after. I don’t like sad endings.

I would most definitely have watched many more seasons. They left Alex pregnant even though they killed off Charlie. What is the matter with the writers – writers block or just too lazy to work?

Was very disappointed that the show was cancelled .. Was upset with the season Finale with Charlie Dying .. Was a great show and stayed up late just on the night it was aired. Really wish Producers wouldn’t cancel out great shows as this one. Going to miss it truly , Was one of the best series ever watched .. 🙁

I was very disappointed that Charlie died after his marriage to Alex. I do not know why you networks who have a great show suddenly decide to cancel it. I stayed up every Tues night just to watch Saving Hope. I think its wrong that the show was cancelled.