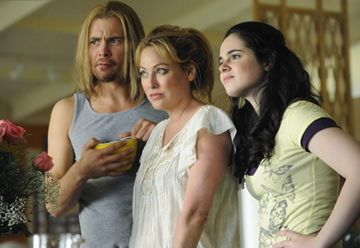 Not that it comes as any surprise but ABC has cancelled Scoundrels, the summer series that was paired with The Gates (also cancelled).

Based on New Zealand’s Outrageous Fortune series, Scoundrels debuted to a 1.3 rating in the coveted 18-49 demographic and 5.23 million viewers. While that’s certainly not very impressive, ABC was able to boast that it was a double digit increase over the previous year’s ratings.

The last episode of the season aired on August 15th and this was posted on the show’s Twitter feed, “Thanks all for watching tonight’s #scoundrels. The cast loved the finale! Hope u all enjoyed it, too! Fingers crossed for 2nd season!”

Unfortunately, based on the ratings, there was very little reason to expect that a second season would be ordered. The show’s feed recently made it official, posting, “Sorry to say guys, SCOUNDRELS will not return for a Season 2. We are all very sad, but thank you all for your loving support!” The TV show’s page at ABC.com has since been removed.

Madsen has been signed to star in Maggie Greenwald’s next film, The Art of Love, with Aidan Quinn, Olympia Dukakis and Zosia Mamet. Meanwhile, Michael Goldstein and Michael Larkin, two of the co-executive producers of Scoundrels, are developing a new show for CBS, based on the book called The Pawn, in association with ABC Studios.

What do you think? Are you sorry to hear that Scoundrels has been cancelled? How would you have liked to see it end?

We love the show. We can’t stop watching episodes 1-10 on On Demand. Bring it back! Advertise the he’ll out of it because it is a great show!

I am pissed, I like that show. Maybe another channel will pick it up.

“reality shows” are nothing but scripted game shows…if anyone thinks what goes on there is “reality” lives in an “altered” reality. It appears that everyone wants their “15 minutes of fame” and the networks don’t mind because it costs a whole lot less to have nonprofessional people in their shows. And usually the top prize is oh, so much less than what it would take to pay professionals. I am very upset to hear that Scoundrels will not be returning for a second season. It had wonderful characters played by excellent actors. I, too, am a big fan of David… Read more »

i loved the show! I’m super bummed it won’t be coming back on air 🙁

I am very upset that its not going to continue! I just now was trying to go to abc.com to find out when the 2nd season started and found out its canceled. I loved the show!!!! I was really looking forward to the 2nd season…

I think the biggest problems with this particular show was the time slot. The one or two episodes I was able to watch, I enjoyed! We cut the TV off at 8PM (Central). Anyway … I regret it won’t be back on air.

I’m very disapointed that there will be no season 2……. I really enjoyed the first season and for it to be canceled it’s another ABC disapointment….. It seems like all the good tv series end up getting canceled; and have been getting very short in episodes….

I tried to get into it but couldn’t. I’m a big David James Elliott fan, but just couldn’t buy him in this role. Maybe all those years as Harm on JAG put an image of the kind of characters DJE is supposed to be in my head. I don’t buy him as even a small time crook.

I liked the show but I enjoyed David James Elliott as even though he got a bit thicker, he’s still sexy and I got a bit aroused for Patrick Fluger, too. I’m gonna miss those guys. 🙁

i love carlos bernard too so much

I was just never able to get interested in this one. I enjoyed The Gates and Rookie Blue, but Scoundrels was the one summer show that never connected with me.

I’m going to miss it. It was slightly entertaining. I so loved watching Carlos Bernard, hopefully he will be in something new soon.

Agree, Bernadette, there was just too much going on w too many characters, thus accomplishing really nothing. As for the ending, that was just rude of tptb, what were they thinking? I will miss only DJE! btw, ABC has turned its back on DJE twice, not smart of them, imho. Thank you! p.s., looking forward to CSI @ CBS!!

I feel that “Scoundrels” was a delightful show with a strong cast. Unfortunately, they tried to cram many happenings into only 8 episodes with the results that some very important parts were completely left out (Wolf”s fist fight in prison ) with no explanation for his black eye. The viewers were left completely hanging when Wolf was released from jail and came home to find his wife Cheryl embracing the police Sargent. Cheryl had already learned that the Sargent framed Wolf by planting evidence at the scene of the crime. What a disappointment we never got to finish what would… Read more »