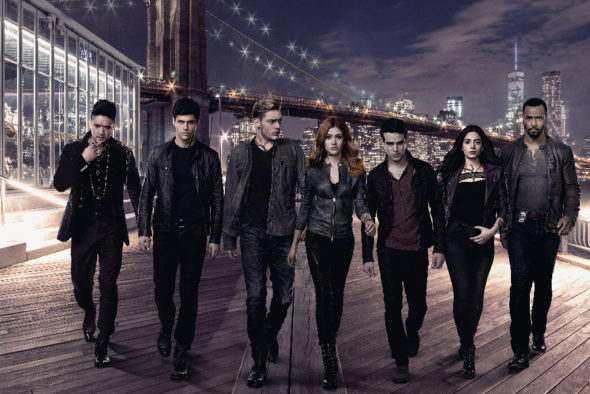 I think the casting is so much better than the movie and the special effects are not unbelievably over the top, like some shows. I look forward to watching Shadowhunters every week, and am eagerly awaiting for the second half of Season 2 to be aired. Please continue on with Season 3!!

This definately needs a third season as its still so unfinished 🙁

Absolutely need a third season this is my favorite TV show. I’m dying to know if Jace tells clary about them not being siblings.

Please bring this back in have watched every episode since season 1. I am so addicted to this show that I’m going to get pissed if I am unable to finish what I started. Please DO NOT CANCEL THIS SHOW.

Shadowhunters is my favourite show. I can´t wait for season 3. Love it.

Binge watching my way through the series at the minute and I absolutely love it! hoping they bring out a third season, especially as there was no more movies.

need another season if not more!!! best show I’ve ever watched.Alec and magnus bane are my favorites!! hopefully keeping the same actors of course! :p (Godfrey Gao) and (Matthew Daddario).

I pray to the angel that Shadow hunters is renewed for a third season. This shows and the books is my life and soul at the moment. I need to see “clace” happen and the show must go on!

Can’t wait for season 3 of Shadowhunters!

me too,i cant wait for season 2

I’m hoping there is 3rd., 4th, 5th and so on season I am an avid book fan and love the shadow hunters there is so much more to come and the love story with Jace and Clary has yet to begin there has to be a season 3

I really hope there Will be a third season! I am a big fan of the books and altho I know series and books don’t always ad up the show really top my expectations. and I would be really disapointed if they would cancel both the show and the movies so both thumbs up for yet another season.