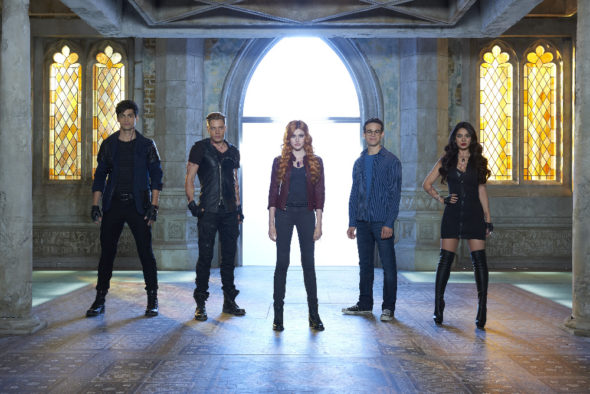 Will Shadowhunters be saved for another season? Deadline reports Netflix is not currently in talks to save the cancelled Freeform TV show.

Despite vocal fan campaigns to save the show, Netflix says there are no negotiations to pick up Shadowhunters for a fourth season. Currently, the series is slated to debut its final season on Freeform in 2019.

No Netflix negotiations are taking place to extend Shadowhunters beyond the 12 new episodes planned to premiere in 2019.”

What do you think? Are you a fan of Shadowhunters? Do you hope the show is picked up for another season?

With all the great shows in this genre coming to an end, this show is only going to grow in popularity. It is a horrible decision for Netflix or someone not to pick up this show for a fourth and future seasons…the best is yet to come and this show is only getting started! It would also be a shame to throw away the actors that fit the characters so well and have such great chemistry to put all the pieces of a great story together. Save Shadowhunters!! #SaveShadowhunters

I loved this show. The Fan base is one of the most loyal for shows I have seen in a long time , Netflix is stupid to not pick it up. This sucks. This is such a mistake

That Sucks, I love this series. Absolutely LOVE it. I don’t watch tv much now because there is hardly anything on worth watching in my opinion. I prefer reading and I have read the books which are amazing so to have them brought to life on screen is great.

Oh come on freeform I just found out that Beyond is cancelled. Now Shadowhunters I can’t take this anymore you just took it away two great shows from me. And Netflix won’t even pick it up. I can’t watch freeform anymore And Surin or whatever that new show is I’m not even going to look at it because mermaid killer mermaids come on. Shadowhunters and Beyond is better than killer mermaids.

I think shadow hunters is Excellent, it’s its loving, caring, sexy and shows how different people/ beings and come to gether in time of need. You’ve just got us all on are toes and now it’s been end, I think you should reconsider

I love the show and am very disappointed…

I watch this show over and over on Netflix. My absolute favourite programme. Gutted if they don’t do any more episodes. How do we petition this?!

It’s on Netflix internationally, but in USA it’s just Freeform and Hulu.

The only reason I started watching Netflix was to watch Shadowhunters if there not going to renew it I have no reason to renew my membership with Netflix !!!!!!!

I love shadow hunters,would be awesome if Netflix would pick it up.