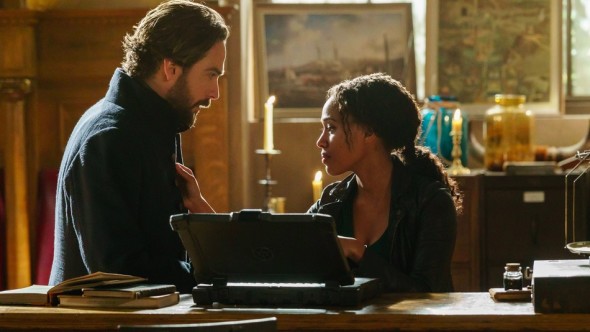 Tonight marks the end of the third season of the Sleepy Hollow TV show on FOX and it very well may end up being the series finale as well. The show has been doing very poorly in the ratings and now, the producers have made a move that will likely infuriate more than a few loyal viewers. Should this Friday night show be cancelled or renewed for a fourth season?

The series was a hit in its early days but those great ratings are long gone. This season, Sleepy Hollow premiered to a 0.98 rating in the 18-49 demographic with 3.36 million viewers. Compared to the third season debut, the debut was down by a whopping 51% in the demo and down by 38% in viewership. SPOILER AHEAD.

The numbers got worse as the season progressed so the execs sent the series to Friday nights, likely hoping that the show’s loyal fans would follow and the ratings would stay at the same level. They looked stable for awhile but the numbers got even worse over the course of the rest of the season. The last couple episodes have attracted about a 0.65 rating with 2.6 million.

And now, in tonight’s finale, the producers have killed off one of the show’s lead characters — Abbie Mills, as played by Nicole Beharie. The executive producers, studio, and network released this statement to EW:

“The finale featuring the tragic death of Abbie Mills was a very dramatic ending and a bold move for the show, but Sleepy Hollow has always been known for its shocking finales. We feel we provided a wonderfully poignant conclusion for Abbie and showed some of the best moments between the Witnesses that we’ve seen on-screen. We thank Nicole Beharie for bringing Abbie and Sleepy Hollow to life. We are currently discussing season 4, and should the series be picked up for another season, we have some exciting scenarios and new avenues we want to explore.”

With such poor ratings, Sleepy Hollow, once again, is very much in danger of being cancelled. Now that one of the main characters has been killed off, should the series return? Should they bring Abbie back somehow or, is it okay that she’s gone? What do you think?

Bring back Sleepy Hollow, I love that show, why did you kill of Abby, she and Crane made the show, bring them back.

Season four will be a joke. Look for a low budget attempt to get enough episodes to sell this loser series into syndication. Another stupid move on Fox’s part.

Really want to see what happens next to Crane by those mysterious men who picked him up at the cemetery. Me and my friends have enjoyed the entire series since watching the pilot. (I watch on Hulu, they watch on cable.). Tom Mison is fantastic as Crane and is so much fun to watch him deal with 21st century life. Given Nicole wanted off the show I think the final third season ep did a good job of capturing so many of the special moments of what made Crane and Abby great as well as Abby’s relationship with Sheriff Corbin… Read more »

please bring back Sleepy Hollow !! The show has a solid fan base and now that who ever controls his head controls the horseman { he was a sight for sore eyes } BRING BACK ABBIE and get back to the charm of season one { we don’t need the FBI either } the true fans will boycott FOX

What bugs me about the show is how inconsistent it has become. Each show has the ability of becoming a really good show but then it is ruined by these cartoon type villains and monsters that wouldn’t scare a 4 year old. A good storyline is needed and has to be feasable. If I want monsters I will watch reruns of Fringe which had great stories and a tight cast.

Sorry but the show missed so many opportunities. They should never had reviled who the headless horseman was so soon. The whole premise was based on the 4 horsemen of the apocalypse….end of the world scenario. It was so good. Abby and Icabod should have had a respectable friendship but instead they had Icabod’s panties all in a wad over Abby and more emotional over her safety than she did for him. They never showed Abby with the same emotional drive and the result was no chemistry. It is a shame because if you saw the 2 of these actors… Read more »

please don’t cancel sleepy hollow its the only thing I would watch ivé been a follower from day one, and please bring back NICOLE BEHARIE as ABBY MILLS, someone else playing ABBIE MILLS will not do. I you bring someone else in to play ABBIE it will ruin the show and I will not watch it because of that. Would also like to see a romantic relationship between ABBIE and ICHABOD. PLEASE RENEW THE SERIES with all the original characters. when you start bringing in different people to play the characters that ruins the whole show.

Please DO NOT CANCEL SLEEPY HOLLOW that’s the only time I would watch television is no matter what night it came on, but you need to bring NICOLE BEHARIE BACK as ABBIE MILLS. Would like to see a romantic relationship between the two. I Love sleepy Hollow so please RENEW for a fourth season. I have the first & second season on dvd, waiting on the third season to come out on dvd

Even though I was there from the very beginning, all my goodwill is gone, and FOX has screwed over what could have been a great series for the last time as far as I’m concerned. I hope it’s cancelled, because they’ve been very shady from the second season on, and there’s no way they’d bring back Nicole and treat her right. They couldn’t even do right by Gillian Anderson with her pay and The X-Files has been a bigger show for a very long time. FOX deserves to continue to be known as the network where great shows go to… Read more »

Bring Abby back!! Their chemistry/ connection was so good!!! I do not want to see the series cancelled. I love the historical supernatural aspect to the series. Very original!

The entire family enjoyed sleepy hollow. Bring back Abbie. She has terrific chemistry w/Crane. We were hoping for a romance. Her sister is terrific and the 2 sisters working together is incredible. Please bring sleepy hollow back.