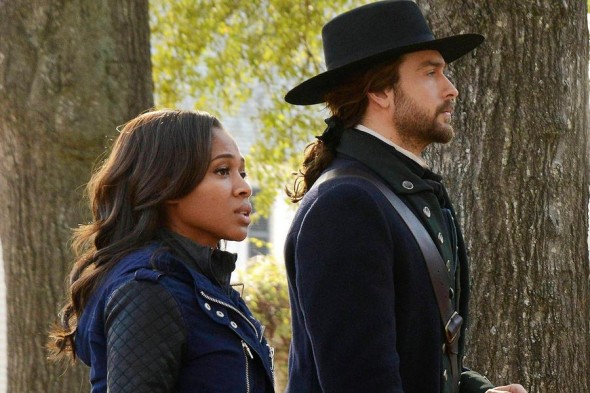 Last season, FOX touted Sleepy Hollow as a hit series of the 2013-14 season and gave it an early renewal. How are things looking a year later, as we come to the end of the second season? Should the series be cancelled or renewed for a third season?

Sleepy Hollow debuted in September of 2013 to a very healthy 3.5 rating in the 18-49 demographic with 10.1 million viewers. The ratings dropped quite a bit over the course of the season — hitting a low of a 2.2 in the demo and 6.46 million — but it remained their highest-rated scripted series of the season.

Unfortunately, it’s been a very different story in season two. The premiere drew a 2.0 demo rating with 5.59 million viewers — a new series low. The numbers took a big dip in week two and have gotten worse as the weeks have worn on. A couple weeks ago, Sleepy Hollow hit yet another new low with a 1.2 demo rating and 3.87 million viewers.

Season-to-season, the Monday night drama is down by about 40% in the ratings — averaging a 1.6 in the demo and 4.58 million total viewers.

Will the show be cancelled or renewed for a third season? It could go either way. The network didn’t hand out an early renewal this time around and we likely won’t know the show’s fate until May when FOX’s plans for the 2015-16 season are announced. While Sleepy Hollow’s performance is way down, much of the rest of the network’s schedule is also struggling.

Their decision will likely depend heavily on what new shows they have in development that could be a good companion for Gotham — one of their two new successful series.

But, what do you think? If you ran the network, would you cancel Sleepy Hollow or renew it for a third season? Would you make any changes to attract new or past viewers.

I feel after Henry was killed off the shows was left to depend on Katrina’s character which was not strong enough to carry through… after that Sleepy Hollow started to put me in mind of the series Grimm..going off track completely of the Apocalypse. If this show is to make a come back …it’s got to get back to the original story line ..

I agree with Betty; FOX had a strong cast the first season, and there was such promise coming into Season 2. Then the mistakes started happening, and the show went off the rails. They got back on track with Season 3 and the absence of Hawley; et al. FOX should put “Sleepy Hollow” back on Monday nights at 9:00 after “Gotham”. It was a wonderful combination of the two shows back-to-back. I hope FOX realizes the amazing cast and writers of “Sleepy Hollow” and what they are capable of. May Season 3 come back strong, with Captain Irving and his… Read more »

FOX YOUR MAKING A MISTAKE, YOU HAD ON BUSY DAY OF WEEK AGAINST OTHER GREAT SHOWS SO FOLKS HAD TO CHOOSE. BUT IF YOU HAD ON MONDAY OR TUESDAYS YOU WOULD HAVE GOTTEN MORE VIEWERS.
i LOVE SPLEEPY HOLLOW -ACTORS CRANE and ABBY ARE OUTSTANDING AND THE WHOLE CAST AND THE WRITERS;HAS JUST THE RIGHT MIX OF INTERESTS TO US VIEWERS IT WILL BE MISSED. GIVE IT ANOTHER TRY BACK TO MONDAY EVEN FRIDAY NITE.

The last I heard, Sleepy Hollow will be back on October 11 at the 9pm slot. Has anyone heard of any changes to this because I watch little TV and this was the only show I felt was worth watching. In a time of Reality Smut, this show gave a perspective into our history with a twist. Historical facts are seemingly correct and its just a joy to watch. It makes me wish I could go back in time and re-live this era in our history. I was born 235 years too late.

If I ran the network, I would make sure that the series that came out strong in the first season and ended with so much promise be afforded a second season, and even a third; the way AMC keeps the momentum going with TWD by whetting the viewer’s appetite for more, and leading them to the brink with on-the-edge-of-your seat tactics, and then let the viewer know that SH will return in March 2016 or something, and giving it a timeslot for reruns more worthy of its subject matter.