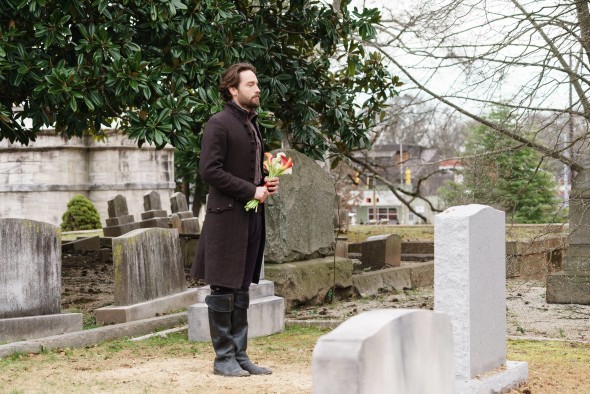 I think her going into the box gives it hope back. I am wandering if she will come back.Sometimes things like this are done to get “a Raise” or a bigger part. But they meant to make you wander. I hope she does because she is a good character. But Icabod going to Washington leaves a possible another Bones cross over? New characters? Its no telling.

You can tell the people that wasn’t here for Nicole/Abbie just look how many people think the show will be better if they get a s4 “DID YOU NOT WATCH S2 AND 3 THEY BOTH SUCKED”. It only lasted as long it did because of abbie fans and killing her off just lost them majority of their fandom. No the show will not get any better and to say she did all she can do is bs. Why wasn’t a new witness activated when crane died so they can mess me with that crap. They sent her off ****** as… Read more »

There was no body to bury…I was surprised to even see a tombstone…it gave me the impression of a dead..not dead…senerio…anyway it was a sloppy ending.

Not watching ever again. The writers, showrunners have once again proven they do not know what they are doing. Even taking out the Abby death, there was hole after hole. Shame on them for having so little respect for the viewers.

One comment from a viewer defines what is going on with Sleepy Hollow…that they are writing it as they go along. The first season was so good with some thought behind it but when they killed the original premise with the whole headless horseman thing it all ended. It always seemed Abby’s affection for Icabod never reached the affection Icabod had for her. Big problem with the show is how the portray women as masculine and men as femmine. Abby always seemed to to be some kind of warriers where Icabod acted like he should be wearing an apron making… Read more »

it is so frustrating when it is terribly obvious that whoever writes these articles doesn’t actually bother to watch the show. Abbie sacrificed her life to stop the hidden one, not Pandora.

Thanks for the correction. There are 600 recent/current/upcoming scripted television shows so it’s a little tough to watch all of them.

Readers don’t expect any one person to watch all the shows that exist… Simply that writers refrain from just using a search engine to do their best guessing when posting content relevant to a particular show.

I am sorry. I was rushing and am a bit behind in watch. Thanks so much for the catch. Sorry for the stupid.

No I will not watch! The story needs both characters without them there is no point. Plus Nicole Beharie was treated with great disrespect on and off set! I am done!

Yes, I would watch it. I think there is a lot of potential to bring the story line back to it’s roots with Crane and the horsemen after the season finale. He is the only character that really can’t leave the show, if you think about it.

But the show was not created to be all about Crane. He is boring by himself. He will need someone to play off and have chemistry with. And Jenny will not do. Yeah, the two work well together, but she is no Abbie. The show will sink like a ship and deserve what it get. They do not have the talent aboard to pull off a decent show.

Please don’t insult brilliant writing and grand performance with stupid threats!!! Its not a show for all perhaps it got to compleax and well done for you it was Abby’s time! I pray this show get renewed!!!!!

Brilliant writing? Grand performances? What show are you watching?

Hey Bob you can not watch ! The show and characters are like nothing else . Better then ex men sagas just most creative and well done story telling. Would be a shame to loose. Please renew #SleepyHollow!

Yes we will watch it. The next season could be the most exciting yet.

I do not think so, you and others are in for a big surprise. Tom is already negotiating a contract for less screen time. So, most likely there will be a bunch of regulars and recurring actors who he dole out tasks to and you will not see him throughout the episode. Maybe in the middle and at the end.

That was his season 3 contract, please stop speaking about thing you know nothing about. Tom will have to carry the show, or they won’t renew it.

I think he needs to leave Sleepy Hallow and find his roots with the show and new new characters…that can act. And enough of Betsy Ross already!

Well, in general, I love the show will always llove the show no matter what and it always have it’s support.
I truly hope to see a 4th season.

Beharie is such a good actress and would love to see her return as a different character if not Abbie Mills. Two of the main characters since season 1 were the main reason they kept the shw afloat.
Do to how it ended, the story needs a second witness because we fans feel upset and left in the dark and it is only fair to do justice somehow. Just bring back Nicole Beharie.

Love how history and the supernatural are inter-twined. My kids actually ask about history now! Please renew and move it from the Friday death time slot!!!!

Actually it’s probably doing more harm than good for kids now a days and probably think this is the real thing. It’s ok for those of us that actually learned American history but kids are only being taught world history…and as for Betsy Ross…well ..Icabod Crane comming back from the dead is more believable.

I am disappointed Abbie is dead. The show won’t be the same, but I will still watch it.

The ending was a letdown..her death would have ment more if she was struck by a car. At least there would have been a body to bury and a funeral to attend.

yes I will still watch it with out Abbie. The show is great. Renew it please.

I’ll have to turn to fanfiction as usual with anything I like.