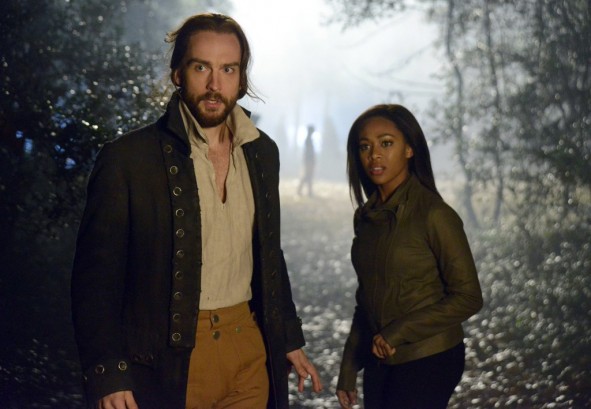 Earlier this month, Sleepy Hollow showrunner Mark Goffman left the series after two seasons. The show’s ratings were way down in season two and word was that the network would cancel Sleepy Hollow if a suitable replacement showrunner couldn’t be found.

Today, FOX announced that Sleepy Hollow had been renewed for a third season of 18 episodes. Clifton Campbell, who created The Glades, will take over as showrunner.

“SLEEPY HOLLOW” PICKED UP FOR A THIRD SPELLBINDING SEASON ON FOX

“SLEEPY HOLLOW is truly inventive television. The talented producers – led by Alex, Bob, Len and Heather – along with the brilliant cast, anchored by Nicole and Tom, have created a fantastic world that brings ‘history’ to life with compelling and vibrant storytelling,” said Madden. “I had the pleasure of working with Clifton on both ‘The Glades’ and ‘White Collar.’ He is an excellent producer, and we can’t wait to see what this team has in store for Season Three.”

The jaw-dropping conclusion of Season Two left Ichabod Crane (Tom Mison) and Lieutenant Abbie Mills (Nicole Beharie) with a decisive, albeit heartbreaking, victory over evil. In the name of good, Crane made the ultimate decision to kill his wife, Katrina Crane (Katia Winter). With evil seemingly at bay, the third season will explore how the partnership between Crane and Mills will evolve and what challenges these two witnesses will now face.

SLEEPY HOLLOW is a thrilling mystery-adventure drama series spanning two and a half centuries, in which a resurrected Ichabod Crane (Tom Mison) pairs up with a present-day police lieutenant (Nicole Beharie) to save the enigmatic town of Sleepy Hollow – and the world – from unprecedented evil.

All episodes of Season Two of SLEEPY HOLLOW are available on FOX NOW and Fox on Demand to subscribers of participating pay-TV services. To learn more about FOX NOW, please visit www.foxnow.com.

What do you think? Do you like the Sleepy Hollow TV show? Do you think it should have been renewed or cancelled instead?

I was worried but I am so glad Sleepyhollow was renew i’m hoping for more seasons and I hope it go on longer than that I love Sleepyhollow it’s different it’s smart and it’s the best show on TV right now for me. I love all the characters and the storylines.

By the way when will the new season of Sleepyhollow be airing so I can get it all set in my schedule!!!!!!

Hope they don’t cancel this show. I would be very disapointed. Love this show and everyone in it.

I’m really happy to see that this series was renewed. I’m so tired of mindless television, reality shows and the like. This is a smart series, well written and historically well researched. Ichabod is immediately likable, as is the supporting cast. Thank you Fox for giving this great show some more life. I watch it on hulu, and can’t wait for the new episodes to show up each week. Keep up the great work!

I am so happy that Fox’s is keeping Sleepy Hollow for another sessions!

Delighted Sleepy Hollow’s been renewed for 18 more episodes in season 3. Have loved the show since the pilot. Recently re-watched the second season and thought that overall, despite some weak points with Katrina’s dealings with Henry and Abraham (the Horseman), and Captain Irving spending way too much time off camera either at the asylum or on the run or temporarily dead, it was enjoyable, if not as good as season one. There were a lot of good Ichabod moments discovering pens on chains in banks, learning to drive, his first experience on the back of a motorcycle, having his… Read more »

Love this show. Looking forward to the new season.

WOO HOO! Phew! I was getting worried there for a minute!

I LOVE THIS SHOW, LIKE SOMEONE SAID ABOVE INSTANTLY HOOKED…. DO NOT CANCELLED

Sleepy Hollow is a very original show with a great cast. I appreciate the creative tie ins with history. I don’t believe Ichabod decided to kill his wife, it was accidental. I hope they’ll write her back into the show. and bring back their beautiful love story.

I watched the very first episode and was instantly hooked. I am so happy there is a third season. I love the cast, the story and the writers. I hope that a season 4 will follow.

Awesome! So pleased to see renewal news! I was a bit worried there for a while.

I really enjoy this show and love the entire cast. The story line is interesting and unique, all of the characters are compelling and I actually care what happens to them. Great writing, great actors and Tom Mison is beyond good looking, which is a HUGE plus! 😉

My only other wish would be that somehow John Noble could be written back into the series. He’s such a pleasure to watch.

“me” – I think what your intimating is wrong, wrong, wrong and completely unnecessary to this discussion. All of the comments about any sexual relationship between the two main characters have been about the unique story of the show, rather than the ‘same old’ model that TV too often falls into. I have not perceived any other motive.

So sad tht you have to bring your prejudices to this forum. Nichole is a great actor and a beautiful, inteligent woman who brings life to the character of Abbie. THAT SHOULD BE THE END OF THIS DISCUSSION!

My comments were misunderstood. I was not being prejudice. I was saying how I see others hate on people like Abbie on tv/movies. I like Abbie and was thrilled to she someone like her in lead on a type of show like Sleepy Hollow, Nichole even said so herself. I asked the site to remove my comment. Cratloe, it really hurt me that you called me prejudice when I was expressing my anger of how I know people who hate on her and other actresses like her. The show will probably go the way you all wish to be safe.… Read more »

this is a great show and should continue on for many many seasons and should be on reruns for generations to come.