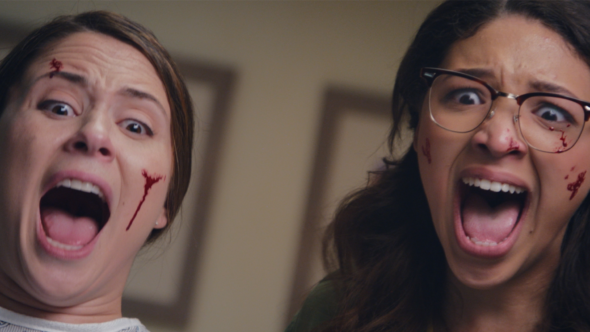 Critically-Acclaimed, Fan-Favorite Series Picks Up on the BFF’s Foray Into Alien Motherhood while Racing to Save the World

LOS ANGELES, Feb. 05, 2018 — Verizon has ordered two seasons (seasons two and three) of the Stage 13 teen horror-comedy “Snatchers.” The fan-favorite series, which premiered in June of 2017, will go into production for season two in New Mexico and starts principal photography on February 5. Stage 13 is the fearless original digital content brand and a division of Warner Bros. Digital Networks.

“Snatchers” is the critically acclaimed premium, digital episodic series about Sara, a status-obsessed high school student, who, in order to preserve her social standing, loses her virginity and surprisingly wakes up extremely pregnant.

Season two of “Snatchers” picks up where season one left off. Our teenage heroes, Sara (Mary Nepi) and Hayley (Gabrielle Elyse), are in over their heads against the evolving alien threat! With Sara’s mom, Kate (JJ Nolan), in the clutches of the creatures, the girls have to enlist help from Skyler (Austin Fryberger), the alien baby-daddy himself. But can he be trusted? And who are the shadowy figures tracking him down? Time is running out and our heroes need to uncover the secret origins of the freaky-deaky menace before it destroys, not only the world, but Sara’s social life as well.

“‘Snatchers’ is the embodiment of our philosophy at MAKE GOOD Content,” said Young. “Cedars, Kleiman and Yacyshyn are incredible artists who self-financed a spectacular short film, which led to a series order and a Sundance premiere. When you make good content, good things happen.”

“We’re excited to have ‘Snatchers’ fans continue the journey with us and Verizon,” said Diana Mogoll�n, Senior Vice President and General Manager of Stage 13. “It’s fantastic to see them connect to this fast-paced story that shows relatable characters dealing with the unexpected alien bundle of mayhem. We can’t wait for season two to premiere and continue our partnership with Verizon.”

“We are thrilled to announce that ‘Snatchers’ will be returning for two more seasons,” said Ivana Kirkbride, Chief Content Officer for Verizon. “The popularity of the horror genre continues to rise and ‘Snatchers’ offers characters and plot lines that viewers will find both intelligent and frightening.”

Called “Scary as hell!…” by NPR, “… Feels like… ‘Alien’ if Monty Python had made it… ” by Desert News, “Would make Sam Raimi proud… ” by Bloody Disgusting and “Super Cray,” by Scream Magazine, the scripted series made its debut at the 2017 Sundance Film Festival in the “Midnight Episodic Showcase.”

“Snatchers” can be streamed on Verizon’s media brand, go90.

Stage 13 is a fearless, original digital content brand showcasing a new generation of inspired talent and voices in scripted and unscripted storytelling. The brand’s series are available on the Stage 13 distribution platforms including the brand’s Facebook, YouTube and social channels, mobile partners including Verizon’s go90, in addition to Stage13.com and Amazon. Creating dynamic, unapologetic series for a multidimensional audience, Stage 13 is part of the Warner Bros. Digital Networks.

Verizon Communications Inc. (NYSE:VZ) (Nasdaq:VZ), headquartered in New York City, generated $126 billion in 2017 revenues. The company operates America’s most reliable wireless network and the nation’s premier all-fiber network and delivers integrated solutions to businesses worldwide. Its Oath subsidiary reaches about one billion people around the world with a dynamic house of media and technology brands.

What do you think? Have you watched the first season of the Snatchers TV series? Did you expect it to be cancelled or renewed by go90?