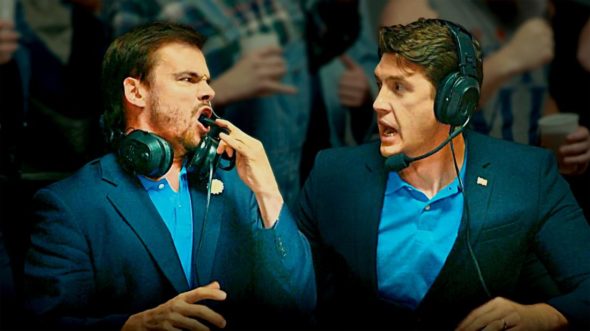 BURBANK, Calif. (December 7, 2017) – UNINTERRUPTED’s Original Series Now We’re Talking, from Warner Bros. Television Group’s digital studio Blue Ribbon Content, has been renewed for a second season by go90 and will premiere on the service in 2018. The live-action sports-themed comedy will provide additional content for fans – scaling up from shortform to the traditional half-hour episode length of 22 minutes for each of the eight episodes ordered for season two.

Created, written, executive produced by and starring Tommy Dewey (Casual) and Tug Coker (The Office), the second season of Now We’re Talking will continue the hilarious rivalry between Tug and Tommy – two former professional football quarterbacks. In season two, the frenemies find their stride as they take the leap into employment as professional broadcasters.

Now We’re Talking season one featured a number of professional athletes and sports broadcasters, including Shawne Merriman, Curt Menefee, Lance Briggs, Plaxico Burress and Landry Fields. Now We’re Talking is both critically and commercially acclaimed, with the first season nominated for a 2017 Writers Guild Award in the Short Form New Media – Original category. TVGuide.com wrote that the series is “the perfect sendup of the ridiculous world of sports broadcasting,” and Forbes.com exclaimed, “If this is the future, then the future might just be bright after all.”

To access go90, simply visit the website at go90.com, or download the app via the App Store or Google Play to watch the series for free.

Founded by LeBron James and Maverick Carter, UNINTERRUPTED is a digital media company totally dedicated to athletes, fans, and lovers of sport. Producing a wide range of unique, creative, and captivating content, UNINTERRUPTED empowers athletes to let the world see what they see, develop their most creative ideas, and tell the stories most important to them. As sports media and cultural influence continues to expand, UNINTERRUPTED is committed to the voice of athletes and the audience that wants to go deeper. In 2015, UNINTERRUPTED entered a multi-year agreement with go90 to provide content, original series and exclusive athlete point-of-view videos. Now We’re Talking was UNINTERUPTED’s first original series for go90.

Verizon’s go90 is a streaming video service bringing you the best in live sports and originals. go90 is part of Verizon’s portfolio of media brands, which includes OATH brands – AOL, HuffPost, Yahoo View, Yahoo Sports – and COMPLEX Networks and more. Stream now for free from the app on iOS, Android or at go90.com.

What do you think? Are you a fan of the Now We’re Talking TV show? Do you plan to stream season two on go90?