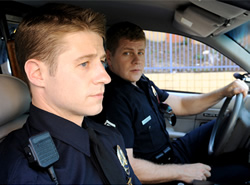 Last week, NBC and 16 million viewers said goodbye to the venerable medical drama, ER. This week, the network debuted a new show co-produced by ER’s John Wells. So, how did Southland stack up?

Southland is police drama that’s billed as a raw and authentic look at Los Angeles as seen through the eyes of the men and women of the LAPD. In the pilot, we meet John Cooper (Standoff’s Michael Cudlitz), a seasoned and no-nonsense cop who’s assigned to guide a young rookie named Ben Sherman (Ben McKenzie from The O.C.). Others in the cast include Regina King (Leap of Faith), Tom Everett Scott (Grace Under Fire), Michael McGrady (Day Break), Kevin Alejandro (Shark), Shawn Hatosy (Felicity), and Arija Bareikis (Crossing Jordan).

NBC certainly needs a hit and hasn’t had much luck lately with the likes of Kings and The Chopping Block. It appears however that the peacock network may have some success with Southland. There are plenty of crime dramas on television right now but not many take the “gritty” approach. Critical reception for the show has been positive overall and viewers seem to agree.

Last night’s premiere attracted 9.72 million viewers with a 3.2/9 rating/share in the 18-49 demographic. Southland was in second place for total viewers in the timeslot (behind CBS’ Harper’s Island) and drew almost three million more than its lead-in, 30 Rock. More importantly, the cop drama was first in the all-important demo.

While the number of viewers of many new dramas have been declining in their second half hour, Southland actually grew by over half a million. That’s a good indication that viewers will return next week and may even bring a friend or two.

Southland also looks pretty good when compared with former timeslot occupant ER. It outperformed most of the medical drama’s final season in total viewers and essentially matched it in the demographic.

Though NBC was surely hoping for better, these ratings are certainly a positive sign. The struggling peacock network could certainly use it. So, what do you think? Is it a keeper or headed for cancellation? If you tuned in, will you return next week?

The premise of the show is good, but we need better writers. Just about ALL the criminals are black. ALL are gang members, doing drive by shootings, killing witnesses, and generally behaving in the stereotypical way.

This show is borderline racist. Look at other cop dramas—Law and Order, CSI, Criminal Minds–we see a variety of criminals.

The bleeping of cuss words also sucks. AND we never get closure to the crimes.

I’m not sure if i want to continue watching this show.

Racist? Are you people for real? Maybe the show should be all fiction and not depict what Los Angeles truly is. Los Angeles is a very diverse City and guess what, black people and other races commit crimes. So the show actually depicts real life events as they occur in Los Angeles. Kudos to the producers of this show. The show is no where close to being racist and does and great job depicting real life crime drama in the City if Angels and shows the police in their true state. Men and women like the rest of us doing… Read more »

By the way, I am not a Sharpton, Jesse Jackson or Jerimiah Wright exstreamist. Not that I consider the opinions these men hold as being exstream. In fact, I am a proud Black Canadian female who does not wish to see people who look like me objectified to fit a stereotype. This show seems to lack balance and the minority actors seem more like props, void of any real emotion with the exception of the token Black female cop. As viewers it’s our responsibility to critique how were being portrayed and determine if your going to continue watching. That’s not… Read more »

I agree this show is racist and cant help but notice every criminal has brown skin. I cant believe I am still seeing shows like this on TV. It’s been a while since I’ve seen a show seperate the ‘good’ and ‘bad’ based on skin colour. This type of programing is a reflection of the network that has created and aired it. I am about 15 minutes into the eposide that has two Black men stealing one of the cops guns and have decided to turn it off. This will be the last time I watch the show and will… Read more »

This show is racist..all young blacks are portrayed as gang bangers and drug pushers. Every crime suspect is minority of some kind while the coppers are all squeeky clean white and they justify this by casting couple of token blacks in the force..

Clean it up or cancel it. Over all….the show has great potential BUT when language needs to be “bleeped” so often, it takes away from the show. I thought maybe it was just the first episode. So we watched it the 2nd week, when it was bleeped even more, we decided not to watch it any more (didn’t even finish that episode).

I like it, the second episode really pulled me in, give ben a love interest and have him open up more.

It’s okay. I don’t care for the handheld camera stuff and some of the characters leave little to be desired, but I’ll give it a shot. I’m kind of on the fence at the moment.

This show was GREAT!! Can’t wait for more! KEEP IT ON!!! And lets get forget these RACIST remarks posted here. it is a clear indication of the diversity seen in the Precinct Level in LA. As for Northbeach and Justice for all, they don’t have a clue! I am an African American woman who lives in LA and I am very happy to see the lead detective as aan African American woman and love that they brought in one of the stars of Shield! By the way he is an African American too! So get over this RACIST crap you… Read more »

Southland…..Can it….there are enough of cop shows, law shows…enough is enough!! Can it, can it, can it!!

Watch the first half hour, but the interested faded away. There is no real plot or story line and I can guarantee that it will slowly become redundant as the episodes continues if it lasts.

Wouldn’t it be more purposefully on just watching Cops to get the gist of the REAL thing?

Its a great entertaining show. I loved the photography and the characters. I would love to see it become a top 10 show. The acting is really worth watching. Keep it on……

justiceforall nails it.
This show is pure b.s..
There’s no way the writers are from L.A.. Who the hell can conceive of a police force in one of the most ethnically diverse cities in the country being so white dominated?
It pains me to think that somehow the producers thought it ok to only show “minorities” (remember this is supposed to be L.A. – whites are the minority in many parts) as criminals, victims and gang bangers.
Also, I vote against using real gang names (i.e. Grape Street). It only serves to boost their reputation.
Boycott this janky ass show.

This show looks like it will be a solid drama if given half a chance, which is rarely done these days by the networks, it seems nowadays that the only way to ensure watching a full season of a show is if it was made for a cable network.