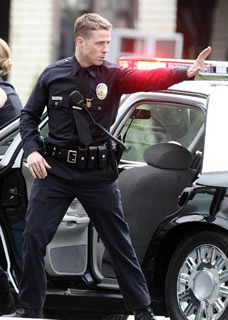 Though NBC has axed Southland before its second season could premiere, the producers aren’t giving up on it. They just need to find the drama a new home.

Southland made a decent debut last season but viewership cooled as the season progressed. NBC renewed it for a second season even though the programmers knew they didn’t have an appropriate place for it on the schedule. After looking at some of the second season episodes, the network execs decided they were too dark for network TV and pulled the plug. Executive Producer John Wells pledged to shop the series to other outlets.

According to the LA Times, Southland was pitched to A&E but they passed on it. The cable channel runs its own dark dramas but is partially owned by NBC so there could be political reasons. It’s a similar situation for USA though Southland’s much darker than their usual programming like Psych and Monk.

A move to FX would have the opposite problem. While the cable channel runs its own gritty programming, FX shows go much further than Southland. AMC could be an alternative but they tend to run more artistic original programming like Mad Men. Pay channels like HBO and Showtime favor shows with offbeat premises and likely wouldn’t touch a network’s castoffs.

Most agree that TNT is Southland’s best chance at a second life. Warner Bros. TV produces the cop drama and TNT is owned by Turner. Both fall under the Time Warner corporate umbrella.

THR is reporting that TNT and Warner have held discussions and that they are “advancing.” In a statement, TNT said, “We continually look at all programming opportunities that fit our portfolio of brands.”

Though any channel is reluctant to take another’s leftovers, the acquisition could make sense for TNT. They regularly air original cop-based programming like Saving Grace (which was recently cancelled). The channel’s most recent offering, Dark Blue, hasn’t been a big success and its fate hangs in the balance. TNT could opt to replace Dark Blue with Southland which already has some viewer recognition and has attracted some decent press.

TNT could also likely get a good deal on the series. Six episodes have already been shot and paid for so Warners would likely offer the cable channel a discount on the 13 episode season.

If they took the deal, TNT would be a hero to Southland fans but it remains to be seen if that would translate into real numbers. Fans have worked to get shows renewed in the past but only a percentage have shown up to watch the fruits of their labor.

What do you think? Would you follow Southland to TNT?

I would follow Southland to whichever channel it went. I was one of the best shows. Please bring it back!!!!

This is such a great show I can’t believe it was cancelled. Really hoping that there’s enough interest it will be a great loss if not continued for 2011 season.

I really like this show and pray that TNT will take it so us fans can watch it. They always play reruns of law and order so I think they can play southland and the new seasons of southland.

WHAT DOES TO DARK MEAN? DOES IT MEAN, TO REALISTIC, TO TRUE TO LIFE? OR DO WE NEED MORE OVER THE TOP NONSENSE!
BOB

As a former police officer I find Southland very authentic, realistic, and therefore very entertaining. There are only a few police dramas that depict the behind the scenes and sometimes the dark side of police work. NYPD Blue and Third Watch were two that did and Southland also falls into that catagory. I sincerely hope some network will pick up the series.

PLEASE PUT SOUTHLAND BACK ON …ITS THE BEST DRAMA ON TV…JOHN G…. LOU.,KY…

I love Southland so please put it back on.I go to all most any lenthg to get to see this pather.

I thought that Southland was a great Cable Drama show; In my opinion it was the next best thing to replacing The Sopranons on A&E.
Bring it back

Few TV shows, if any interest us here at home. A comedy or two. Law and Order, reruns of Homicide: Life on the Street. This show, this show has us hooked. Intelligent, not Hollywooded up and captivating. Please, we beg you, don’t cancel this show.

I was into this show from day one. I was an avid 3rd Watch fan and knowing what Wells did with that show, I was hoping to see the same from Southland. It’s too bad NBC didn’t think this way. I hope TNT can save this show, I’ll tune in on every episode!

I AGREE, IM A COP AS WELL AND THIS SHOW HIT HOME. THIS IS A GREAT SHOW AND IM GLAD IT WAS SAVED. ITS A VERY REALISTIC SHOW ATLEASLT UP TO THIS POINT.

BEING A COP MYSELF, I RELATED TO THE SHOW AND LITERALLY EXPERIENCED
MANY OF THE SHOWS TAKE ON POLICE WORK. GLAD AND THANK YOU TNT FOR
SAVING THIS SHOW……..