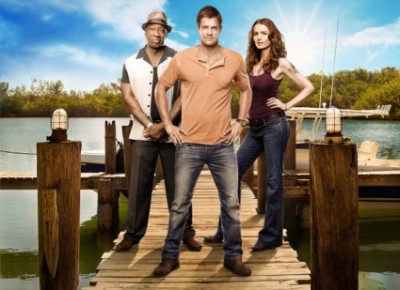 Bones has been a quiet hit for FOX but the same can’t be said for its spin-off, The Finder. FOX has now cancelled the low-rated series after one season.

The Finder is a procedural series that revolves around a man (Geoff Stults) with the extraordinary ability to help people find the unfindable. Other castmembers include Maddie Hasson, Mercedes Masohn, and Michael Clarke Duncan.

The spin-off debuted on January 12th to a disappointing 1.7 rating in the 18-49 demographic with 5.50 million total viewers. It was fourth in its Thursday night timeslot right out of the gate and lost nearly 30% of the all-important demo from its compatible lead-in, Bones. This was not a good start.

Things picked up a bit in the following weeks, thanks in large part to the show having FOX’s blockbuster American Idol as a lead-in. Still, the numbers weren’t as high as they should have been.

After seven weeks on the air, FOX put Finder on hiatus and then moved it to Friday nights, giving its Thursday timeslot to Touch. If The Finder could maintain a healthy percentage of its viewers after the switch, it would likely garner a renewal.

But that didn’t happen and Finder’s numbers dropped like a rock. In its first Friday airing, the freshman series attracted a 1.1 demo rating — an episode-to-episode loss of 53% — with just 4.03 million viewers. The numbers for future episodes fluctuated a bit but didn’t really get any more encouraging. The network could do just as well or better by running cheaper reality programming.

The season finale of The Finder is set to air this Friday night and there won’t be any episodes after that. Hopefully the producers saw the writing on the wall early enough and won’t leave viewers hanging with any major unresolved storylines.

What do you think? What went wrong with this show? Why do you think The Finder failed to attract a bigger audience? Was cancelling the series the right decision? How would you have fixed it?

Think its sad it was a good clean show and take it off. You keep trash on an i finally get a good show on it gets canceled.

we just watched the series on Netflix. We feel it was missed because of it being pitted against other highly rated shows at the time so no one had a chance to see it. We fell in love with the series and wished it had more.

I loved this tv show the Finder …especially in the last few episodes and particularly the finale where Walter’s dark side got revealed for the first time.

This finale was also particularly great because it really made you want to know what was going to be happening next for these same characters….

We stumbled onto The Finder and LOVED it – witty, fast paced, engaging, great characters. We’re SO disappointed that there are no future seasons. If it flopped back in 2012 our guess is that it wasn’t advertised – at all? not well enough for sure.

No it’s a great show just didn’t give it enough time to spread like wild flower. But it’s sad the good shows don’t make it but the boring ones run 3 to 10 seasons

I JUST found FINDER on Netflix and really like it!!! So bummed that it was taken off. I watched BONES for years and loved the show. Moving shows around is painful. As much as I liked BONES, once they moved it, I couldn’t watch it anymore because of the time slot. The characters in FINDER were fun and quirky, but the message of friendship was strong!! We need more shows like that!!

This was an awesome show and I was so looking forward to seeing the next season. Sadly I don’t watch TV, only Netflix due to my schedule being crazy, yet once I found this show I binge watched it on my day off and I was hooked. While I especially loved Leo, who sadly has died since Finders stopped, I was really looking forward to Willa coming back. I wish they would continue the show, but maybe Netflix will make a season two out of it. I mean, being dead hasn’t exactly stopped Carrie Fisher from being a huge part… Read more »

I love the show. I watched it all on Netflix in one day and couldn’t stop. And I love Bones, probably my favorite show. The Finder would have been just a hit with time. Please make a season 2

Please bring it back. The ending has haunted me for 5 yrs. Please at least let us know what happened to him.

Yes, I know how you feel. How will Willa do. And Walter. But since Michael Clarke Duncan died for real in 2012, seems it could also not even be a tv movie to finish it up. They where considering a sort of farewell to Walter and Leo episode in Bones, but after Michael died, it seems we not even get that anymore. Have the seem bad feeling as with the ending of the Canadian tv serie The Border. Hate open endings.

This show should make a comeback. Maybe, it was before it’s time? I think, with all the revivals of 1990’s shows. A continuance of this show, would be a good way to counteract. Doing so would bring awesome reviews and ratings for “The Finder”.

Of course. This is just my opinion. Thank you.

It was a great show that should have run for years like ‘The Dukes of Hazzard” or “Midsomer Murders.” Fox executives seem to have a propensity for suddenly cancelling popular TV shows. It’ll be their downfall…