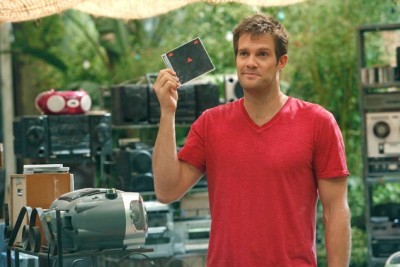 FOX is bringing back The Finder quicker than expected. The network is delaying the premiere of Hotel Hell until summer and are using the Friday 8pm timeslot for the unaired episodes of the drama.

It had been announced that the Bones spin-off would have its spring finale next week, on March 8th. The Finder has been a ratings disappointment and it was unclear when or if the show would return. Now, FOX has decided to shift it to little-watched Friday nights starting April 6th. There will be six original episodes left at that point.

The season to date has averaged a 2.2 rating in the 18-49 demographic and 6.63 million total viewers. Despite having a big lead-in like American Idol, The Finder is the second lowest-rated drama on the network, beating only Fringe. It looks likely that the freshman series will be cancelled after just one season.

Don’t miss THE FINDER’s last Thursday episode on March 8 (9:00-10:00 PM ET/PT), in which Walter (Geoff Stults) searches for a teenage girl who goes missing during an intense storm. Meanwhile, Isabel (Mercedes Masohn) uncovers clues that link the girl’s disappearance to foul play and Willa’s (Maddie Hasson) probation officer puts her differences with Willa aside to join in the search.

What do you think? Do you think this move confirms that The Finder will be cancelled or is this like a second chance for the struggling series?

I am like everyone else on here. I just watched this on Netflix & I loved the show! I was so so mad when I saw they were not airing it anymore
Bring it back!

I recently finished the finder on Netflix and I was pissed when I found out it was cancelled that is my favorite tv show and only because it wasn’t shown on the right days and they didn’t give it enough showings on commercials I think the finder should be aired again so I can see what the hell happens to walter and the family what ever critics or people say that show isn’t any good then the can go shove one and I think 6.36 million people that did watch this show would agree bring it back

I just found the Finder on Netflix, I am so disappointed that I did not see any of the episodes before this. It is a fabulous show that no one knew was there. Definitely needs another chance.

I totally agree. There are many evenings when this program would catch on, can it be brought back?

It would seem that if Fox wants its consumers to keep watching the shows it starts, Fox would at least not leave us hanging with the last episode of Season 1 where Walter, the US marshal and the girl on probation all going down. This show was one of the good “Who done-it” since “Murder She Wrote.” I really got addicted to “The Finder” and am so upset that there is not a season 2 and I’m left hanging due to the ending of the final episode in Season 1. For the sake of those of us who really got… Read more »

Please bring this back . Someone earlier said they couldn’t find it consistently, I had the same problem and had to wait for Netflix to have it. I am also sick of so called “Reality” shows with copulating stupid men and women all looking to further a so called career in media. Who cares about the Kardashians? Get a life people and watch shows that have some morale redeeming qualities. Oops did I say moral, that probably kills the show right there. If its not sex, sick, and naked no one seems to want to sponsor it.

Amen Janet, I agree, give us The Finder!

I really enjoyed this show and just thought about it tonight. We need light hearted shows with good actors instead of these dam stupid reality junk. Who gives a dam about the lives of these idiots who live like animals anyway? I always watch CBS because you do not have many decent shows on

it seems the network , get red of the good shows, and keep the krap.

Great shows like The Finder get cancelled because the networks put them in terrible time slots. Failure is eminent because I never FOUND this show until it was on Netflix. I could do without all those singing and dancing reality shows, I turn on Netflix all the time because regular TV sucks. BRING BABCK THE FINDER

Please bring back the finder! We need light-hearted dramas that are and hour, rather than half an hour, long! Awesome cast, fun storyline and exciting. Please bring it back. I’m with the others, give people a chance to get into it and enjoy it. I loved it from the start! PLEASE BRING IT BACK!!!

why cancel the finder and alcatraz i enjoyed them as with all new things we got to get into them. sometimes i buy new shoes my feet hurt in them but i dont throw them away i wear them in the house to get used to them.. why dont they get rid of joan rivers and the kardasians and married to jonus and all that rubbish i live in the uk and dont know anyone who watches them shows but they keep putting that rubbish back on i have only seen trailers of them who takes fashion tips off a… Read more »

Why are my favorite tv shows cancelled? I can’t believe that i’m so out of sinc with what most people like to watch.

I just started watching it on Netflix too and I love it. I’m really disappointed its no longer running after only 13 episodes. I agree with Mel; bring it back!

I just started watching this on Netflix. I think I saw one show maybe when it was on originally and I don’t know why I didn’t see it after that – maybe because they moved it? I just hate it when they cancel a show (especially after moving it’s time slot – people can’t keep up with these moves). I just went looking to see if there was a second season and maybe I would get lucky and hit the 3rd season coming up. Sometimes, when they move something people just think it’s on hiatus or possibly gone and don’t… Read more »