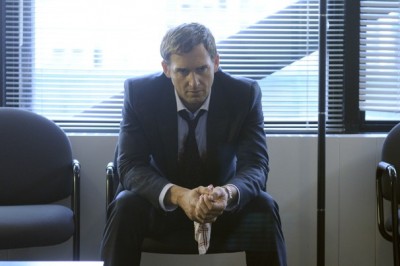 Tonight, NBC premieres their latest legal drama — The Firm. This new TV series isn’t based on another TV show like Prime Suspect but is instead based on the John Grisham novel, which was turned into a feature film in 1993.

The Firm TV series picks up 10 years after the end of the 1993 movie with Mitch McDeere (Josh Lucas), his wife Abby (Molly Parker), and daughter Claire (Natasha Calis) coming out of the witness protection program. The mob boss they feared is dead and the McDeere family believe that enough time has passed that they’ll be safe. Relocated to our nation’s capitol, Mitch starts his own practice, Abby is a teacher, and Claire is making real friends. Unfortunately, things don’t go as smoothly as they’d hoped and trouble starts all over again. The show’s cast also includes Callum Keith Rennie, Juliette Lewis, Tricia Helfer, and Shaun Majumder.

It’s been nearly 20 years since the release of the feature film. Was the new TV show worth the wait? Is it worth your time? Here’s what some critics have been saying:

Boston Herald: “The two-hour pilot is a chore to sit through… ABC’s fairy tale serial Once Upon a Time has more connection to reality than this dreck. Parker is criminally wasted as the voice of common sense. Lucas is flat and dull, forced to spout such pompous lines as, ‘I spend my day making sure that no man’s freedom or future is taken unjustly.’ Mitch just might be the stupidest attorney ever depicted on TV. I wouldn’t trust him to handle a library fine.”

LA Times: “Although it opens with a fast-paced chase scene, things quickly bog down with flashbacks and all manner of story lines, none of which seem to be dominant or terribly compelling… Like so many reboots, The Firm is a waste of precious resources, especially its cast… The question is, do we need such a show when we have Damages and The Good Wife? It may be ironic to call a legal thriller created by the man who all but invented the legal thriller derivative, but in this case, it feels very much like the truth.”

Washington Post: “The two-hour pilot debuting Sunday night is strong and goes in every direction tantalizingly. Enough happens to keep you from changing the channel, but there are hints of a show that could get dull fast… There’s a lot going on, but for now, The Firm seems intriguing enough to have the time to decide what it wants to be.”

NY Times: “Having performed such leaps of logic, the writers apparently didn’t have much strength left for the weekly plot, which is notably slight and unbelievable, even for a TV legal drama. Mitch is forced by a do-gooder judge to defend a teenager in a schoolyard killing. Hearing that the dead student’s father wants to put out a hit on his young client, Mitch does what any good lawyer would do. No, not call the police. He has his brother pretend to be a hit man and solicit the job. The folks over at The Good Wife will be wondering why they didn’t think of that one.”

Hollywood Reporter: “The two-hour premiere of The Firm on Sunday (9 p.m.) is likely to snag viewers who are on the lookout for yet another legal thriller and don’t mind being diverted from the central shocker for most of those two hours. In the meantime they’ll get a solid if unspectacular story about one of the most unlucky lawyers ever depicted on television.”

Kansas City Star: “The TV cast is all right, but it’s not on that level [of the movie cast]. Lucas seems especially bland. And I resent it taking the time slot of the much better Prime Suspect.”

USA Today: “For the most part, The Firm cries out to be quickly forgotten — but it does have at least one memorable moment. Capping a geographically muddled opening chase, Mitch plunges into the Capitol reflecting pool, confounding his pursuers, who split up and go around rather than following Mitch across. What, because the pool’s filled with acid and Mitch is the only one with safety booties? It’s a small matter. But a show that opens with that kind of casual, incompetent stupidity is telling you how little effort it plans to expend on telling its story, and how little respect it has for your intelligence. Take the hint.”

What do you think? Are you going to watch the Firm series? If you’ve already seen it, will you tune in again?

Just watched Season 1. Had no idea that there was no season 2.
Why? It was very good. Take this show off the air for some stupid low IQ reality show?
Give me a break.

I loved the program. I could not wait for saterday to see the next show. I was really disapointed when you took it off the air. Please bring it back as soon as possible!

My daughter and I watched this every week and DVR the episodes we miss!! Please bring this show back!!! We miss the show!!!!M

We think that it was the best show on TV. Why cancel it??????? Good acting and a good stories!! Critics-give us more stories with cursing and sexual innuendos!!

I still miss this show. The critics are not the rulers, why not listen to the watchers.

I am really hoping you bring back this show. The Firm is the best show on TV in a long time. If NBC cancells this show I will do my best not to watch NBC ever again. You need to let the viewers know what is going to happen and when the new season will begin.

I LOVE THE SHOW!!!! I AM MISSING IT, AND CAN’T WAIT UNTIL
IT’S ON AFTER THE OLYPMIC’S.

I look forward to the program The Firm , I would be so disappointed if it was not to show again. There are so few decent programs on the air, It is interesting, informative, and enough activity to make me want to see the next segment.

Who are these critics, obviously they should be fired as the firm 22 shows later still keeps me interested. One of the best written shows in a while… its bc of people like these critics that shows get canceled, quick to judge, and then the station (NBC) listen’s to everyone except the viewer.

I truly enjoy this series. It is intriguing and keeps you wondering where it will go every week. It is a show everyone can watch with out worrying about being exposed to trashy words, scenes etc.
I would like to see it continue on, next season.