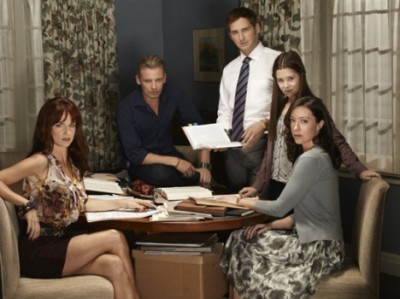 TV show description:
As a young associate, Mitch McDeere (Josh Lucas) brought down the prestigious Memphis law firm of Bendini, Lambert & Locke, which operated as a front for the Chicago mob — and his life was never the same.

This TV series picks up 10 years after the end of the John Grisham novel and 1993 feature film. We find that Mitch, his wife Abby (Molly Parker), and their 10-year-old daughter Claire (Natasha Calis) are tired of hiding. After coming out of the Federal Witness Protection program, they relocate to our nation’s capitol.

Mitch starts his own practice, Abby is a teacher, and Claire starts to make real friends. Unfortunately, past dangers are still lurking and new threats are everywhere.

Tammy Hemphill (Juliette Lewis) is Mitch’s feisty and sexy receptionist, whose work life is made all the more tumultuous by her on-again, off-again relationship with Ray. Tammy is leery when Mitch accepts a deal to partner with a top law practice, Kinross & Clark, as she’s not cut out for the conservative culture of a white-shoe firm.

Andrew Palmer (Shaun Majumder) is a charming, gregarious and ambitious partner at Kinross & Clark. He plays basketball with Mitch in a local league on the weekends and uses that connection to approach Mitch about a partnership with his firm. Alex Clark (Tricia Helfer) is a managing partner of Kinross & Clark. She’s a dynamic and a very confident lawyer who, like Andrew, has secret reasons for wanting Mitch on board.

Series Finale:
Episode 22 — Chapter Twenty-Two
Claire wakes Tammy up early on the most important day of her life – her wedding day! When Abby hears Tammy struggling over what to wear, she steps in, offering up her own wedding dress. But in order to make it work for Tammy, Abby’s going to convert the gown into a mini. Once dressed, Tammy realizes she’s missing something blue.

Luckily, Claire has made her a blue macrame bracelet, emblazoned with Tammy’s new name: Mrs. Tamara McDeere. Mitch finds Ray at the office, sweating over the mysterious blond guy, whom he still can’t locate. Mitch reminds him that the wedding should be his priority today. Nevertheless, Ray’s intuition is spot on, as elsewhere in the city, the blond guy distributes weapons to his men in an alley, then climbs into an SUV bound for the church where Ray and Tammy are getting married.

After Tammy and Ray say their personal vows, the priest is just getting to the “I dos” when a car alarm just outside the church goes off. Figuring it’s his car, Mitch dashes to the curb, only to get tased by the blond guy and his masked henchman, tossed into a duffle bag and loaded into an SUV. Ray runs outside just as the SUV speeds away. Ray runs back into the church and orders Abby to call 911 as he tries Mitch’s cell phone — which rings.

When a groggy Mitch picks up, Ray tells him to hide his phone and keep the connection live. Thinking ahead, Ray has installed a GPS tracking app on Mitch’s phone. He leaves Tammy to follow the signal on the church computer while he drives after the kidnappers. But Mitch’s kidnappers aren’t dumb, so they pull over the car and seize his phone, then zip him back into his duffle.

Unfortunately, the signal from Mitch’s phone dead ends in a parking lot. When Ray calls Mitch’s cell again, he follows the ringing to find the phone in the back of a random pickup truck. In the meantime, the kidnappers swap cars at a gas station and proceed to the edge of a quarry pool. Wearing their ski masks, they march Mitch through the woods to a cliff high above the pool. Finally, the blond guy removes his mask, aims his gun at Mitch’s head and says, “You want to know who I am?”

After ordering Mitch to stop his inquiries, the blond guy shoves him off the edge of the cliff into the water below. Mitch makes his way back to the gas station, where he asks a stranger to call the police. It’s not long before Louis Coleman is on the scene. After reviewing the situation, it becomes clear that the Russians are on the verge of declaring all-out war on the Moroltos.

Back at the house, Mitch tells Abby, Ray and Tammy about his kidnapping experience. Everyone concludes that the Russians are framing Patrick, and Joey needs to know. Mitch hopes Joey will let him off the hook since he was almost killed, but no dice. Joey promises to take care of the Russians, and from now on, the McDeeres will be under the Moroltos’ protection. Later, Joey meets with Russian mob boss Luka Karpov, and gets right to the point: Joey wants the man who murdered Charlotte to come forward or he’s taking the war to the next level. When Joey offers the photo of the blond guy, Karpov promises to talk to him, but won’t promise anything else, departing with more than a few thinly veiled threats.

Karpov summons the blond guy, aka Viktor, to his club to discuss Charlotte Miller’s murder. Viktor denies killing her, so he is dismissed for the time being with a warning. Meanwhile, the McDeeres have uncomfortably accepted the presence of Joey’s men in their home. Ray thinks the Russians are crazy, but Mitch feels the best plan going forward is to point to Viktor as Charlotte’s murderer in court.

The next day, prosecutor Olivia Danville questions Detective Keene on the stand to establish what happened on the night of Charlotte’s murder. When it’s his turn, Mitch wastes no time trying to create the possibility that Patrick was framed and introduces Viktor’s photo. He explains that he has a witness who can confirm Viktor broke into Charlotte’s building on the night of the murder – and couldn’t Patrick’s cigarettes have been planted in her apartment?

Louis Coleman visits Tarrance at the FBI to check out his Russian mob wall. He’s surprised to see a photo of Viktor Kurylenko and demands Tarrance bring him in for questioning. Tarrance promises to see what he can do, then meets with Viktor to tell him to back off the McDeeres. Later, Karpov gathers his men to set the wheels of an epic plan in motion, which will involve the future murder of a foreign diplomat.

Back at the office, Abby and Tammy comb through Patrick’s police files once again, and decide to watch the video of Detective Keene interrogating Patrick. When Patrick lights up a cigarette it hits the women like a ton of bricks: this is the cigarette that was planted in Charlotte’s apartment! Could the Russians have paid Keene to plant it? Mitch doesn’t know for sure, but he wastes no time playing the video in the courtroom, pissing off Keene, Olivia – and the judge. Nevertheless, he’s made a deep impression on the jury.

Tarrance storms into Coleman’s office, angrily demanding to know why he put out an APB on Viktor. Tarrance confesses that not only are the Russians an FBI priority, but Viktor is his informant. And he’s not arresting his key asset to bail out a guy who works for the Moroltos. Tarrance better back off, or he’ll be sorry.

During a break in the trial, Patrick and Joey congratulate Mitch for a job well done – the frame defense is working. Mitch isn’t too sure; he could tell that Keene didn’t plant the cigarette in Charlotte’s apartment, since he didn’t have a prepared answer to Mitch’s question about it.

Meanwhile, Coleman gathers Abby, Claire and Tammy. He says he’s not sure what’s going on; all he knows is that he’s supposed to get them to Judge Trott’s chambers as soon as possible. They bump into Mitch on the way, who claims Judge Trott is waiting for them… to finally seal Ray and Tammy with the bonds of matrimony!

That night, Coleman meets with the McDeere family at the house to reveal Viktor’s identity, and that he’s working as an informant for the FBI. Furthermore, Tarrance knows Viktor is involved in Charlotte’s murder, but he doesn’t care. And yes, the FBI may be involved in framing Patrick. The only way to free Patrick is to pursue the truth, together. It’s going to be the U.S. Marshals, the McDeeres and the Moroltos vs. the FBI and the Russian mob.

That night before going to bed, Abby tells Mitch she’s been thinking about Claire. After all the years of therapy Claire will need, Abby hopes she’ll take one thing away from this situation: if something out there is preventing you from being who you really are… fight it!

Six weeks later, in a replay of the season opener, a breathless Mitch races across a rooftop — and jumps!
First aired: July 14, 2012.

So, Mitch ends up running on a roof top… ??? Is that it? Seriously? How ridiculous! What happen with the trial?? Don’t understand when they have some so good and end up the worse way… unfinished!

Please bring back the firm. Why does nov take off great shows and leave garbage on or a lot of stupid reality shows? What about us people who enjoy the well clean written shows??? Please respond with an email!!!!!!

Bring back the firm . That was really good show, lots of action and keeping you guessing. What’s wrong with you people at NBC? Give it a chance.

Seriously? There is nothing on tv is loved a much as The Firm. My husband and
I lived for this program. SOMEONE made a huge mistake. You have lost us……

Are you kidding? A favorite show with great actors.

Have been waiting for this show to come back on, very sad that its cancelled. Love this show