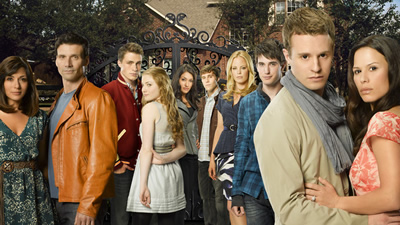 I love the gates! Please keep it either on ABC or another channel!!

man sunday nights is the only time i watch tv!! and its all because of the gates! now we have gotten hooked on other shows because of it….true blood,the gates,entourage and the glades..please dont take my sunday favorite away!!

Season finale tonight and I can’t wait, but I am BUMMED that it’s going to end! Please do not cancel..it is exciting, sexy, dramatic…so TV cutting edge! I am in my mid 50’s and these are the qualities that appeal to every generation!

Watched every show in three days to catch up. ABC needs to move it to a better time slot then more would watch it. Its a great show. But because of football the time slot sucks and would kill it in the rateing. Seems like the put their best shows in the wrong time slots all the time. Way teens and older went for the twilight series if they moved the gate to something like tuesday or wendseday at 8 o’clock the ratings would spike. But don’t cancel it yet give it time to build its audiance

Please dont cancel it! You keep canceling the shows i love aka eastwick! That was amazing and now this show please dont do it listen to the fans!!!

Seriously, I love this show and am going to feel very let down if it goes. If it needs a rejuvenation shot, then killing off some of the storylines and concentrating on a few pivotal characters is my suggestion. ‘Definitely keep Dylan and Claire and Andi and Charlie…

No! Don’t deprive us of the Sunday night vampires… else, I’ll have to stalk the ABC suits and gnash their necks…!

Love the Gates, Please don’t cancel this show, It’s Awesome!!! Need to know what happens next.

Didn’t even know this was on this summer or we so would have watched this. Want to pick it up now, will rent the DVD upon release to get caught up and hopefully they will not cancel and we will have another vamp series we love in addition to True Blood and Vampre Diaries!

does it make a differance , i like the show does that mean they will keep it on

Keep The Gates! It is a rockstar show…..very well written, great characters/mystery….don’t make a mistake and let it go….

I love this show. I think the genre is really appealing because it is a bit science fiction, drama and well done at that. I hope you keep the show going into the next season.

Don’t cancel the Gates…love it. ABC has done a great job with this show. My husband and I look forward to watching it each week. Please keep the show on, it’s imaginative and a lot of fun.

I am a big fan of the Gates — I hope this show stays on air! I need to know what is going to happen next – Please ABC – Keep it ON!

I am begging ABC not to cancel The Gates! I am hooked on it ! It is one of the best shows EVER…and i’m 44….I love to do the Nielsen ratings…I think they pick the wrong people….I haven’t had much reason to watch ABC in awhile…NOW, with The Gates I do.