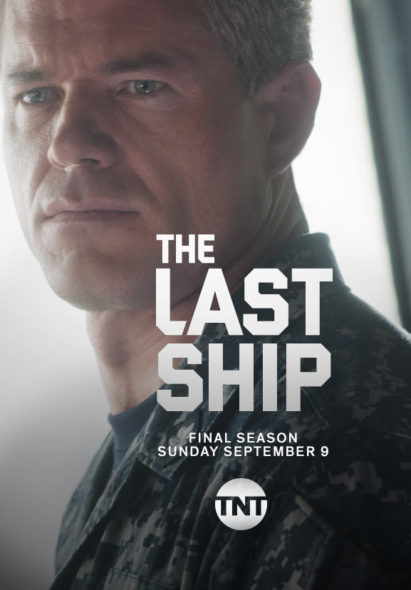 The final voyage of The Last Ship TV show is almost here. Today, TNT announced that the fifth and final season of their action TV series will debut on Sunday, September 9th, at 9 PM. There will be 10 episodes once again.

Here are the The Last Ship press release and teaser:

TNT’s epic drama The Last Ship will complete its final mission when the show returns for its fifth and final season on Sunday, Sept. 9, at 9 p.m. (ET/PT). Eric Dane (Grey’s Anatomy), Bridget Regan (Agent Carter) and Adam Baldwin (Firefly, Chuck) star in this action-packed series chronicling the aftermath of a global catastrophe that nearly decimated the world’s population.

This season, the world is finally recovering from the deadly virus that devastated the population, but global political unrest remains. Tom Chandler (Dane) has retired and his former crew has scattered, many having risen in the ranks within the Navy. Sasha Cooper (Regan), Lieutenant Danny Green (Travis Van Winkle), SBS WO-N Wolf Taylor (Bren Foster) and Sergeant Azima Kandie (Jodie Turner Smith) are on a covert mission in Panama. When they are wrongly blamed for an attack on the Panamanian president, the consequences for the United States are dire. The Nathan James must fight to prevent invasion by Latin America — and the next world war. Season five is The Last Ship at its most epic, upping the ante on action and excitement, but at its core, it underscores the costs of prolonged war and the toll it takes on the heroes who fight it.

The fourth season of The Last Ship ranked as one of the summer’s top five cable dramas among total viewers, reaching a total of 24 million viewers on TNT’s linear, VOD and digital platforms.

About TNT
TNT is basic cable’s #1 network in primetime with young adults and is home to one of cable’s most popular slates of original series, including The Alienist, Animal Kingdom, Claws, the upcoming I Am the Night, Snowpiercer and Tell Me Your Secrets. TNT also presents popular shows such as Arrow, Supernatural, Bones and Castle; primetime specials, such as the Screen Actors Guild Awards® and the iHeartRadio Music Awards; and championship sports coverage, including the NBA and the NCAA Division I Men’s Basketball Championship.
Website: www.tntdrama.com
Pressroom: www.turner.com/pressroom/united-states/tnt
YouTube: www.youtube.com/user/tntweknowdrama
Facebook: www.facebook.com/TNTDrama
Twitter: twitter.com/TNTDrama | twitter.com/TNTPR
TNT app available for iOS, Android and other platforms and devices.

About Turner
Turner, a WarnerMedia company, is a global entertainment, sports and news company that creates premium content and delivers exceptional experiences to fans whenever and wherever they consume content. These efforts are fueled by data-driven insights and industry-leading technology. Turner owns and operates some of the most valuable brands in the world, including Adult Swim, Bleacher Report, Boomerang, Cartoon Network, CNN, ELEAGUE, FilmStruck, Great Big Story, HLN, iStreamPlanet, Super Deluxe, TBS, Turner Classic Movies (TCM), TNT, truTV and Turner Sports

What do you think? Do you like The Last Ship TV show? Are you sorry that there won’t be a sixth season for this TNT series?

I love the show. Dane is a hunk – and to think I am an 82 year old widow. All the cast is great. Just saw Travis Van Winkle on a Hallmark movie. I am very sorry to see the show cancelled. I will miss it.

Love THE LAST SHIP. Have enjoyed each season and watch them several times over. Am disappointed that this will be the last season. The saddest part of the whole series was when that witch caused Tex to be killed. Thank you to the cast and crew of THE LAST SHIP for all your hard work to make a great program.