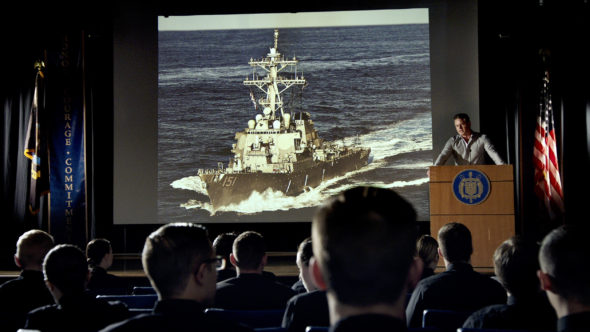 Is it all smooth sailing during the fifth and final season of the The Last Ship TV show on TNT? As we know, the Nielsen ratings typically play a big role in determining whether a TV show like The Last Ship is cancelled or renewed for season six. Unfortunately, most of us do not live in Nielsen households. Although it wasn’t technically cancelled, many viewers are frustrated their viewing habits and opinions weren’t considered, before TNT decided to end The Last Ship with its fifth season. We care what you think, so we invite you to rate all of the season five episodes of The Last Ship below.

A TNT post-apocalyptic drama, The Last Ship stars Eric Dane, Bridget Regan, Travis Van Winkle, Bren Foster, and Jodie Turner Smith. The drama centers on the crew of the USS Nathan James and their response to a deadly virus that has wiped out most of the world’s population. In season five, the world is recovering from the pandemic, but global political unrest remains. With Tom Chandler (Dane) retired, his former crew has scattered, including those who have remained in the Navy. Sasha Cooper (Regan), Lieutenant Danny Green (Van Winkle), SBS WO-N Wolf Taylor (Foster) and Sergeant Azima Kandie (Smith) are on a covert mission in Panama. After they’re wrongly blamed for an attack on the Panamanian president, the consequences for the United States are dire. The Nathan James must fight to prevent invasion by Latin America, as well as the next world war.

What do you think? Which season five episodes of The Last Ship TV series do you rate as wonderful, terrible, or somewhere between? Should TNT have cancelled or renewed The Last Ship for a sixth season? Don’t forget to vote, and share your thoughts, below.

WE wont to season 6

Well i’ve thoroughly enjoyed the series down under here in New Zealand,many of our friends hadn’t heard of it but now they all love it ! .
I purchased seasons 1-4 on blu ray . This show i feel is a very underrated yet exciting tv series. I think a few more seasons would be well received. It will be surely missed by many
if the studio really call it a day .

Please let there be another year

Please don’t stop the show! This is one of my favorite shows. Not much good shows on tv anymore. Seems like ever time I find a good one it gets canceled. I love The Last Ship!

Don’t know about the direction of the show but it has something many don’t and that’s good character development! It has technical inconsistencies but it is very watchable. My wife and I always watch it. So many of the shows on lack character and are lame to the degree they are unwatchable. It should be renewed!!

Please don’t stop the show.This is one of my favourite shows.Me and My friends enjoy it very much.

Really enjoy this show, would love to see it continue just don’t know where it would go next.

Wish the series was continuing. We love it! The only frustrating part is that you have to wait so long between seasons that you have to find reruns to remember where you left off. Please, please continue the series! Would love for it to become a weekly show year round!

I think The Last Ship should be renewed. We love this show and wish it would continue.

I totally agree. I watch every episode, and try to catch a rerun. Just love it.