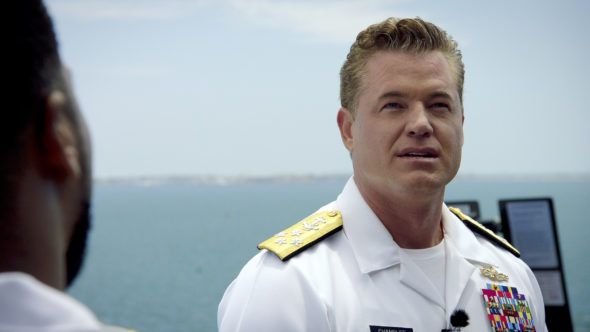 Is the Nathan James now in dry dock? Has The Last Ship TV show been cancelled or renewed for a sixth season on TNT? The television vulture is watching all the latest cancellation and renewal news, so this page is the place to track the status of The Last Ship, season six. Bookmark it, or subscribe for the latest updates. Remember, the television vulture is watching your shows. Are you?

A TNT post-apocalyptic drama, The Last Ship stars Eric Dane, Bridget Regan, Travis Van Winkle, Bren Foster, and Jodie Turner Smith. The drama centers on the crew of the USS Nathan James and their response to a deadly virus that has wiped out most of the world’s population. In season five, the world is recovering from the pandemic, but global political unrest remains. With Tom Chandler (Dane) retired, his former crew has scattered, including those who have remained in the Navy. Sasha Cooper (Regan), Lieutenant Danny Green (Van Winkle), SBS WO-N Wolf Taylor (Foster) and Sergeant Azima Kandie (Smith) are on a covert mission in Panama. After they’re wrongly blamed for an attack on the Panamanian president, the consequences for the United States are dire. The Nathan James must fight to prevent invasion by Latin America, as well as the next world war.

The fifth season of The Last Ship averaged a 0.22 rating in the 18-49 demographic and 1.21 million viewers. Compared to season four, that’s down by 28% and 22%, respectively. Learn how The Last Ship stacks up against other TNT TV shows.

Since they have already announced the show was ending, fans don’t have to waste time wondering whether TNT will cancel or renew The Last Ship for season six. Subscribe for free news alerts on The Last Ship.

What do you think? Is The Last Ship ending at the right time? If it were up to you, would TNT cancel or renew The Last Ship for season six?

great show ! please bring it back

A great series – bring it back for a 6th season..

This series show is the best and i love it. please consider our request not to end it here

please dont leave us hanging like this, i want to know how everyone life turns out. This is the best series I’ve ever watch. please produce more of it..this is call on behalf of my family that we have repeatedly watch this series 6 times from S1 to S6…so please dont leave it end here

The Last Ship was a great show while it lasted. The only thing i didn’t like about the show was in season 5 where the actors began to say God’s name in vain excessively. It was unnecessary. It began towards the end of season 4 and heavy in season 5. That is probably why your viewer numbers went down in season 5. Just a thought?

yes you’re right but for me on the other hand i think its better to say God’s name in such times of danger rather than calling or saying satan’s name or swearing..

I do hope you bring back the show for a 6th season.

Please keep the Last Ship going! I love that show. Please renew it!

Please please reconsider. This is a call out to still continue making more seasons of The Last Ship! It’s a really great tv show. Let us know where we can digitally sign a petition for it to continue.

The Last Ship is the best program that has ever been on TNT.
It is very disappointing that such an interesting and high quality program is cancelled.
There is so much garbage on television that should have never been aired, never mind being renewed year after year.
The Last Ship deserves to be renewed regardless of what the ratings are.

I like to thanks the producer of the Last Ship
For giving us a excellent ending on tonight’s show and the actors and the well done on the best series I ever watch… Just wish this series could come back with season 6…. And give us more clarity of how everyone life turn out.. But hopefully fans out there and including me.. Will hopefully get that chance to see how precious life is on the series of The Last Ship.

One of the best shows on tv. Can’t believe that it is being cance
Lled