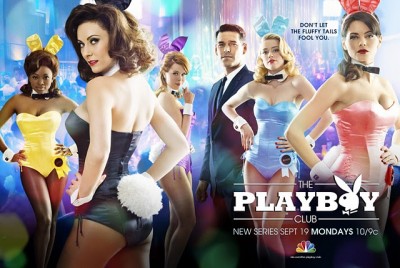 Here are the updated ratings for the Playboy Club TV series. Set in 1960s Chicago, this drama follows the lives of those who visit and work at the legendary Playboy Club. The first season of The Playboy Club typically airs on Monday nights at 10pm on the NBC network.

Here are the TV show’s ratings for the 2011-12 season, the best way to tell if The Playboy Club is going to be cancelled or renewed for season two. Check out our NBC ratings report card to see how this show’s numbers compare with the others on the network.

UPDATE: The Playboy Club has been cancelled and pulled.

Episode 01-01 — Monday, 9/19/11
It certainly wasn’t a very impressive start for this NBC series. Playboy Club registered a meager 1.6 in the 18-49 demographic and just 5.02 million viewers, putting it in third place for the timeslot, well behind the returns of Hawaii Five-0 and Castle. The competition more than doubled Playboy Club’s ratings in both the demo and total viewership. That’s really terrible.

What’s more, last year’s now-cancelled Chase premiered to a 37% better demo rating (2.3). NBC may not pull Playboy Club for awhile because they have so much invested in it but this one is surely dead-on-arrival.

What do you think? Do you like the The Playboy Club TV series? Do you think it should be cancelled or renewed for a second season?

I am really enjoying The Playboy Club! I hope it doesn’t get cancelled, that would be a total bummer! Who doesn’t like hot chicks in sexy bunny outfits? 😉 I know I sure do!

It’s not a stupid show. It’s actually good and I especially like the girls on the show.

I like the Playboy Club, I have watched both episodes in real time not DVR at a later date and time. I find the writing very good and the players were all believable in the parts. The Playboy Club rewards the viewer with what it would have been like to have lived in that time period as a young man, a young woman, a slightly older man, a slightly older woman and how the times indeed have changed. I can’t believe that the ratings are that low. I think it needs a second look by all that may have only… Read more »

I am a fan of The Playboy Club. I was lucky enough to be able to go to The Playboy Club “back in the day.” Wish they’d give this show a chance. I do watch Castle and record The Playboy Club on my DVR. (As for Hawaii-5-0, not my cup of tea. A remake of the original with Jack Lord “back in the day” was so much better than this new version. ) Do the networks count shows that we rcord on our DVRs? I have two and keep them busy! Something is wrong with the TV rating system. Seems… Read more »

Not a fan of Jersey Shore or any reality TV show and I still think this should be cancelled. What I ~am~ a fan of is quality scripted programming like Castle and Hawaii 5-0, which both air in The Playboy Club’s timeslot. Guess the network’s kicking itself regarding Chase?

Cancel the show, and no, I do not watch other trashy shows such as Jersey Shore. There’s no respect for women on this show.

I bet those who say cancel the show “enjoy” a good jersey shore… or some other lame reality show…
Give the show a chance before you start a lynching mob, and see where it goes.

I actually really enjoyed the first episode! I hope they don’t pull it :/

I watched it and did enjoy it, I was hoping that it would transport me back to the early 60’s…as Mad Men does very effectively..but it really did not.The club and mansion scenes could be from today,except for the old cars and old telephone,it did not bring me back to the 60’s,an era I remember fondly…hopefully “Pan Am” will acheive this in Mad Men fashion. But I will watch it next week, and hope it survives for awhile.

I was young man in the 60s so I grew up in the era of The Playboy Club. I really enjoyed the show, the costumes and the cars, and the storyline was intriguing. I will continue to watch and hope it dosen’t get cancelled. I also watched Chase, which I labeled as “Annie get your gun”.

I actually did not watch it when it aired, because I am not missing Castle or Hawaii 5-0. (My DVR can only record two shows at once in the same time period). So I watched THE PLAYBOY CLUB on on demand, and I was not impressed. Yes I love seeing all the hot girls made and up dressed like its 1964 or whatever, but the show, as far as the story—not much there. i don’t think it will last.

I loved The Playboy Club. I tivoed it & watched it again with my hubby & some friends & everyone enjoyed it. But what do we know? We loved Chase & they cancelled it! Give these shows a chance for heavens sake or put them in a less competitive time slot till they get seen a little!!!

I think it should be cancelled

The thing is…….you probably have no idea about the bunny culture so your making a “stupid” comment.