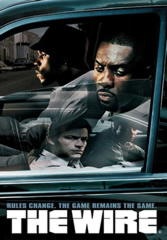 HBO viewers will be saying goodbye to yet another series very soon. After five seasons, The Wire has wrapped its final episode.

The Wire debuted on June 2, 2002 on HBO. The gritty inner-city drama was created by writer/producer and former Baltimore Sun police reporter David Simon. Years earlier, Simon had created NBC’s Homicide: Life on the Street, a series based on his own non-fiction book. The Wire initially focused on the war between the Baltimore police and a drug cartel but later expanded to focus on the impact of drugs on different parts of the community.

Though the series generally receives critical acclaim, its ratings have never been stellar. Last season, each episode averaged only 1.6 million viewers. Simon has attributed this to the show’s heavy use of slang, the timeslot, the setting, and the cast being predominantly African-American. Others have also pointed to the fact that another gritty drama, The Shield, debuted on FX around the same time.

Simon has been planning the end of the series for quite some time. He’s always seen The Wire as a visual novel and reportedly wanted each season/chapter to focus on a different aspects of inner-city life — drug trade, politics, reform, schools, etc. The final 10 episode season will focus on the media and follow a morally-challenged reporter played by Tom McCarthy.

The cast and crew knew that the “novel” would come to an end but Simon didn’t tell them when until last year. Actor Wendell Pierce (Detective William “Bunk” Moreland) shared, “He told us from day one, ‘It’s a novel.’ He had the novel in his head, and he wouldn’t share with us.”

Production on season five began on April 30th and the final bit of shooting took place Friday night and very early on Saturday morning. The episode was fittingly directed by Clark Johnson who also directed the pilot. Johnson was a regular on Homicide (Detective Meldrick Lewis) and plays a newspaper editor in season five of The Wire.

The Wire series finale will be a 90 minute episode but production schedules demanded that it be shot in a tight 11 days. A bit after 3am on September 1st, Sonja Sohn (Shakima Greggs) wrapped her final scene with tears and said, “It’s not going to be like this again. It can’t be.”

Standing in the Baltimore soundstage, which will soon be converted into a Wegmans Food Market, Deirdre Lovejoy (Attorney Rhonda Pearlman) said, “I was a wreck. But there was a funeral [of a crew member’s daughter earlier in the day] and that put everything in perspective. This is a happy death.” Mused Clarke Peters (Detective Lester Freamon), “It’s time to pull the plug on The Wire.”

The fifth and finale season of The Wire is set to debut on January 6, 2008. Stay tuned!

I am a TV and Film Director/Producer/Editor and i am a music Producer, i worked in Tv stations with a lot of series, and music clips, movies, commercials, documentaries. from my point of view The Wire is the best Tv series and OZ follows it, i am talking about Production, directing, acting, DP, Screen play, the whole Production team. This Tv series next to OZ series, i always watch them from time to time to get information and direction on how to do Film and tv series, the Characters they just get into you, the picture although now we are… Read more »