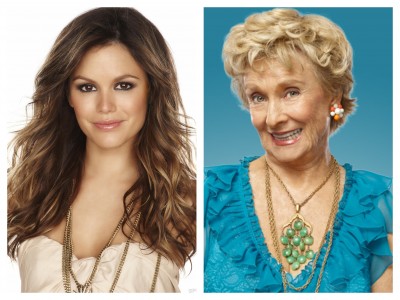 Tuesday, October 3, 2012 ratings — Two shows returned last night — Hart of Dixie and Raising Hope — while the rest of the schedule was filled with original episodes of Dancing with the Stars, Private Practice, NCIS, NCIS: Los Angeles, Vegas, The Next, Ben and Kate, New Girl, The Mindy Project, Go On, The New Normal, and Parenthood.

At 10pm, it was the second installment of Vegas. That drew a 2.1 in the demo with 12.1 million viewers. This series dropped by 16% in the demo which isn’t unexpected for a second week but puts the show in unhealthy territory ratings-wise.

On NBC, a clip-show version of The Voice brought much lower ratings and clearly hurt the rest of the night’s programming. How would sitcoms Go On and The New Normal do without the great lead-in?

Parenthood finished the night on NBC with a 1.7 rating and 4.48 million viewers. That was a decline of 6% in the demo and the lowest rating since February 2012.

At 10pm, it was the latest installment of Private Practice. The second episode of the season dropped by 16% in the demo to a 1.6 rating and 6.12 million.

On FOX, it was four hours of sitcoms. The return of Raising Hope drew a 1.7 demo rating with 3.89 million viewers. Year-to-year, that was down by 45% in the demo (vs a 3.1 rating) and down by 42% in viewership (vs 6.73 million). It was however right on par with how the sitcom was performing at the end of last season.

At 8:30pm, the second episode of Ben and Kate drew a 1.6 demo rating with 3.26 million, a decline of 24% Ouch! New Girl followed at 9pm with a 2.8 rating and 5.07 million viewers, essentially matching last week’s performance.

Then, the second installment of The Mindy Project garnered a 1.9 rating with 3.75 million viewers, a week-to-week loss of 21%. Double ouch!

An original installment of The Next followed with a 0.3 demo rating and 0.66 million viewers. That was up by 50% in the demo from last week’s installment.

What do you think? Do you think Private Practice and Vegas are in serious trouble? How about the new FOX sitcoms? What were you watching last night?

FOX keeps hiring producers who have never had a hit. Results like Mindy Project aren’t surprising in that light.

Midy Project is still doing better than Fringe, so if they’ve got political pull they’ll be renewed anyway (see the five-year disaster that was ‘Til Death – nobody watched it for five years!)

Why do you keep focusing on them?

They don’t give away viewers for free.

[…] peacock network offers their spin on last night’s ratings for The Voice clips show, Go On, The New Normal, and […]

I’m kind of surprised by the numbers from The Mindy Project. I thought the second episode was much better than the pilot since it showed real growth for Mindy, and the literal pain stemming from that. I watched that last night, but my girlfriend wasn’t home to see it with me, so thankfully it was recorded. I’m going to stick with Mindy Kaling and her show on Tuesdays, and I can’t wait to see where her adventures take us next week!

i saw NCIS, then taped NCIS:LA. Watched the previous weeks Bones with my kids.