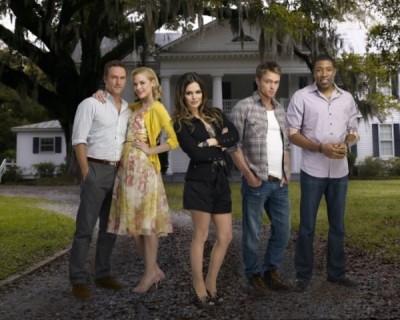 TV show description:
This dramatic series follows a brand new doctor from New York named Zoe Hart (Rachel Bilson). After graduating at the top of her medical school class, she plans to follow in her father’s footsteps as a cardio-thoracic surgeon. Zoe’s fellowship falls through at the last minute so she decides to accept an offer to work with Dr. Harley Wilkes, an elderly physician who has a small practice in Bluebell, Alabama.

She arrives in the small town only to find that Harley has passed away and left his half of the medical practice to her in his will. She quickly finds that Southern hospitality isn’t always so hospitable. The only other doctor in town, Brick Breeland (Tim Matheson), worked for Wilkes and is less than thrilled to be sharing the practice with this young outsider. His daughter, Lemon (Jamie King), is a Southern belle whose sweet disposition turns sour as soon as she meets Zoe.

Zoe feels like a fish out of water and is ready to pack her bags, but a surprise visit by her snobby New York mother (JoBeth Williams) leads to Zoe’s decision to stay in Bluebell for a while, discovering small-town life and a side of herself she hadn’t known was there.

Series Finale:
Episode #76 — Bluebell
As Zoe and Wade try to work out their issues, Zoe makes a life-changing decision and Wade does everything he can to make it happen before their baby is born. Lavon feels guilty about misleading Lemon and is determined to make things right. Meanwhile, George and AnnaBeth are frustrated with their current situation, leaving them with a big decision to be made.
First aired: March 27, 2015

What do you think? Do you like the Hart of Dixie TV show? Do you think it should be cancelled or renewed for another season?

I really do hope that there will be a reboot, somehow ‍♀️. Best show ever, Rachel is an awesome actress