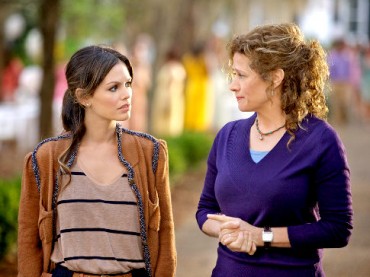 The CW rolls out their last new original TV series of the fall season tonight, Hart of Dixie. Have they saved the best for last? The critics don’t think so.

In Hart of Dixie, Rachel Bilson returns to television as a New York cardio-thoracic surgeon named Zoe Hart. She moves to a small town in Alabama to work as a general practitioner after her fellowship falls through. She arrives to find that the doctor has died and left half of his practice to her. Zoe falls for a handsome local (Scott Porter) who’s already got a girlfriend, the daughter of her adversary, the town’s other doctor (Tim Matheson).

Is it worth your time to tune in? Here’s what the critics are saying:

Boston Globe: “In Hart of Dixie, Rachel Bilson stars as a brilliant young doctor who – oh, I should just stop there. This new CW series, which premieres tonight, is just a mess of bad choices, from casting Bilson as a New York doctor to the lazy way the writers get her to move to a tiny Alabama town against her will. There is very little to like in this hourlong dramedy pilot, as it lunges from silly to cloying to preposterous to insulting.”

Salt Lake Tribune: “Actually, Hart of Dixie is pretty much a total rip-off of Northern Exposure, with a change of gender in a change of direction. Exposure was about an arrogant young male doctor who headed north to Alaska, where he encountered a small town full of quirky characters and struggled to fit in.”

“Change ‘male’ to ‘female’ and ‘north to Alaska’ to ‘south to Alabama,’ and it’s the same show. Only without the charm, the smarts and the humor. Bilson could be a big TV star. She could carry a show. But not Hart of Dixie. Nobody could carry this show.”

LA Times: “The only mildly interesting character (and apparently the only person of color in Bluebell) is the mayor, former football star Lavon Hayes (Cress Williams), but his part, in the pilot anyway, is small. JoBeth Williams also makes a couple of appearances as Zoe’s nightmare mother who is, one assumes, the person to blame for all of Zoe’s blind ambition. Which will be softened by a small Southern town that is lovely to look at but, like the show itself, is more about moving pieces around a set than telling a new or interesting story.”

USA Today: “From the earliest days of film and TV, some of our most cherished moments have always involved unintentional, incongruous hilarity. Think Zsa Zsa Gabor as a Venusian scientist in Queen of Outer Space. Think Matthew McConaughey as a famous theologian in Contact. Now think The OC’s Rachel Bilson as a top-of-her-class new doctor eager to become a cardio-thoracic surgeon, just like dear old dad, in Dixie.”

NY Daily News: “So we’ve got a medical drama, a small-town soap opera, a romantic comedy with two attractive and capable leads, plus bits and pieces of all those Reese Witherspoon movies. There just might be enough here to fly.”

What do you think? Will you watch Hart of Dixie? If you’ve seen it, do you think it should continue or just be cancelled?

Actually I very much enjoyed hart of Dixie!! It was very entertaining and even emotional sometimes! I enjoyed the small town values it reflected on and being from a town much like BlueBell itself I found it very warming and close to home! Excellent show I do recommend it to others

My hubby and I just started watching Hart of Dixie on Netflix and we love the show. I dont ever go by what the critics say. Their opinions do not matter to me. Keep the seasons coming… Love the characters, the setting and the story…

keep it keep it. Even when I have a late meeting, I record it and it is great to watch. Love the intrigue and romance.

I simply love the show! It’s a nice excape from reality. Keep it, please.