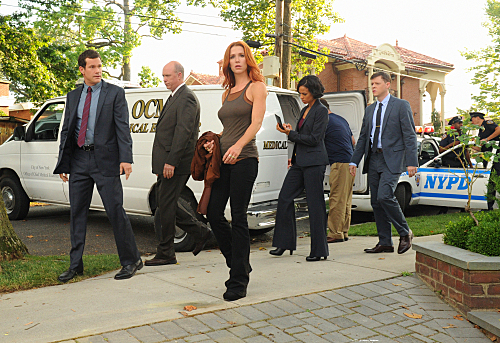 TV show description:
This crime drama revolves around Carrie Wells (Poppy Montgomery), a woman who has a (nearly) perfect memory. She can recall every place, day, and conversation that she’s ever had. Unfortunately, she can’t let go of the ones she’d rather forget, including the murder of her sister many years earlier. Unlike any other event in her life, Carrie can’t recall some key details of that day when she and her sister were playing in the woods and it haunts her.

Years earlier, Carrie worked for the Syracuse Police Department and used her abilities to help solve crimes as a detective. Carrie was dating her partner on the force but they broke up, she quit the force, and then moved to New York.

Most recently, Carrie’s been supporting herself by counting cards at gambling halls, thanks to her perfect memory. Unfortunately, once the establishments catch on, they throw her out.

Carrie and Al reunite when she’s asked to consult on a homicide case. Being back on the job feels right and, despite having conflicted feelings for Al, Carrie decides to join his unit as a homicide detective. She sees things that other people miss on their cases and hopes that, one day, she’ll finally be able to solve her sister’s murder.

Series Finale:
Episode #61 — Paranoid Shooter
When a shooter on the loose triggers a flashback that doesn’t add up with Carrie’s perfect memory, the team at Major Crimes discovers that a nefarious conspiracy is at play and trained killers are among them.
First aired: January 22.2016.

What do you think? Do you like the Unforgettable TV show? Do you think it should have been cancelled or renewed for a fifth season?

I couldn’t believe it when I heard this was cancelled! Bring it back for a second season please!

Where’s the petition for this show? I really liked Poppy Montgomery and Dylan Walsh on this show.

CANCELED??? come on are you kidding me??

Unforgettable is a great show with a good cast. Don’t cancel.

I hope this show doesn’t get cancelled… I watch it every week without fail. I really hope it returns for season 2!!!

[…] Unforgettable revolves around Carrie Wells (Poppy Montgomery), a woman who has an incredible memory. She can recall every place, day, and conversation that she’s ever had — except some key details of the day her sister died and it haunts her. The rest of the cast includes Dylan Walsh, Michael Gaston, Kevin Rankin and Daya Vaidya. […]

I love the show pick it up again and give it a chance.I never miss it and record it when I am working.I am a big fan,co give the show a chance to grow.

we like unforgettable.
dont cancel, renew for another season

This show is great and screams “give it a chance to grow”. Would be very unwise to cancel, but surprised it hasn’t done better after the two NCIS shows.

My husband and I love this show! I can’t believe it is on the bubble. Please don’t cancel this one!

Really love this show! perfect group of main Characters too! kind of like Bones and Kirk ( Star trek original series) with Kevin Rankin and Poppy. Good plots keep coming too! “Carries Caller” top of list with a drop dead good hanging ending! Running bad guy killer is like Dr Loveless in Wild west..always just out of reach.. Hope you guys keep this on. I don’t watch a lot of shows because they are usually so darn stupid! but this one is GREAT! My second after this is Person Of Interest!

I hope this doesn’t get cancelled, I like poppy montgomery from without a trace. I hope they give it a chance.