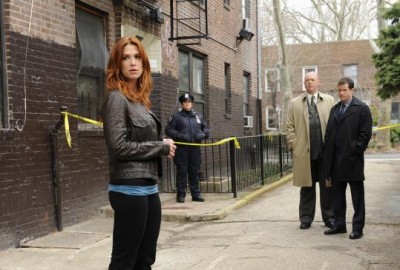 CBS has three new dramas to debut this fall season and tonight, they’re launching the first one — Unforgettable. With a title like that, it’s like the producers are just begging for sarcastic headlines and reviews. Unfortunately, many of the critics are all too happy to oblige.

Unforgettable revolves around Carrie Wells (Poppy Montgomery), a former police detective who can’t forget any details from her past — except important ones surrounding her sister’s long-ago murder. She’s tried to put her old job behind her but, when she consults on a homicide case, Carrie is unexpectedly reunited with her ex-boyfriend and partner, NYPD Detective Al Burns (Dylan Walsh) and his team (Michael Gaston, Kevin Rankin, and Daya Vaidya).

Here’s what the critics are saying about Unforgettable:

LA Times: “The dead little sister is haunting, but Montgomery is not. Carrie is sad to the point of mopey; she takes no joy in her talent nor does it torture her, as one imagines it would. She, like Walsh, is solid, but she needs to be driven, by something, by anything. Even their romantic chemistry is flat; they treat each other more like siblings than old flames.”

“Unfortunately, if you name a show Unforgettable you really need to deliver, and the pilot just doesn’t.”

NY Daily News: “While Unforgettable gives each character passing moments of dry humor, overall, it’s a darker show than Castle. Carrie carries her sadness more heavily, and this show doesn’t seem to have the extended comic riffs of Castle.”

“On the other hand, it uses New York better than Castle, since it’s actually shot here — mostly in Queens, where Carrie says ‘you can still get a one-bedroom for $1,200.’ Montgomery’s last gig on CBS, Without a Trace, lasted seven years. Unforgettable has a ways to go, but it’s got a lot of the right stuff.”

Hollywood Reporter: “Once called upon to remember every single important detail of a day or scene, Montgomery’s character basically goes mute and looks around in slow motion while the camera replays what we’ve already seen.”

“It’s a new kind of plodding — so slow, you are almost begging her to stay retired so you don’t have to witness her gifts in action again.”

Boston Globe: “Walsh, no doubt relieved to be freed of the late-period high jinks of Nip/Tuck, and Montgomery — playing Carrie toward the prickly, understandably know-it-all side — are fine as old lovers and partners negotiating new ground. Unfortunately, Unforgettable itself does very little of that.”

Salt Lake Tribune: “Yeah, it’s pretty hokey. But if you like procedurals — if you’re a fan of the various CSIs and NCISes and so on — you may well like this one. Walsh and Montgomery are both likable TV actors … although, even after seven years on Without a Trace, Montgomery’s Australian accent still pops through every once in a while. This show isn’t Unforgettable, but it’s decent entertainment.

AV Club: “A gimmicky cop show has to justify its gimmick, and the pilot for Unforgettable doesn’t do that. It could have easily told the same story without Carrie’s super-memory powers, which doesn’t bode well for future episodes. Neither does the back story of Carrie’s murdered sister, which promises to be doled out in such tedious, incremental fashion, no one could possibly care about whatever revelation awaits. Next patient, please.”

What do you think? Will you give Unforgettable a chance? Is it worth watching or should it be quickly cancelled?

I love the show !!!!! I would like to see more of it give it a chance I record all of its shows, thats how much I like it.If you cancell it I will not watch anything on this station anymore.It is a really good show,I think Poppy Montgommery is an excellent actress and she makes the show.

I love this show! Please renew it. I would love to see it go on, and Montgomery and Walsh are great together. Keep it going!!!