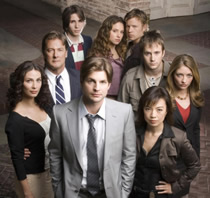 The network giveth and the network taketh away. FOX recently announced that it was pulling the struggling serial drama Vanished from its schedule for the next few weeks of sweeps. The upside for fans was that it was scheduled to return on December 1st. Not anymore.

FOX has officially cancelled Vanished and it won’t be returning to primetime at all. The series will be replaced by final episodes of Justice, another freshman drama that’s been cancelled.

The four remaining Vanished episodes (the last of which is called the “series finale”) will be shown online. A new segment will be available each Friday, the same day that NBC is posting new Kidnapped episodes. You can see the latest episode (episode #9, “The Cell”) right now by visiting FOX’s Vanished page on MySpace. Three episodes will be kept up at a time and the series finale will be posted online on Friday, December 8th.

There’s no word if Vanished will eventually appear on DVD.

i’m so pissed that they cancelled this show. this is by far the best show on tv. bring back the show or at least show the last few episodes instead of putting it on myspace.

I can’t believe this….What the heck is going on?
Don’t they give a darn about the viewers anymore, or just care about the xtra bucks in their pockets, 3 houses isn’t enough for them they need another 4.
Gets me sick. I was really hooked on this show, I just loved it. The least the network can do is release a DVD of the whole series. Maybe I’ll forgive them if they do.

This is silly, just silly. By far the best show id ever watched, and my community was catching on. At least put the series on DVD.

There is no respect for the viewers. We are all hooked and then the serie is cancelled. The same for Justice. I was ready to change Ghost Whispers for Vanished … What are they thinking ?? !!!!

Okay Fox, Next time you try to get us hooked on a show we probably won’t be sold. This is not the first time you’ve started a series and then cancelled it prior to the end. There are other tv stations – – we’ll start there from now on.

FU*K THIS! I’m boycotting FOX until 24 comes back on, every good show that i watch gets cancelled, this is such bulls**t, i think we should make FOX “vanish” and then put 24 and Vanished on ABC

I just finished watching the second to last episode of Vanished on-line and I have to way that is BY FAR the best TV drama I’ve ever seen. I’m a bog fan of Law and Order and 24 but this show has the best of both those shows combined!!!!

The writing is excellent!!! I have never seen a better written show than this one. So many twists, so unpredictable, very interesting plot…

FOX WAS NUTS FOR PULLING THIS SHOW FROM THE AIR!!!

Vanished was probably one of the best shows that challenged its audience since UPN’s NOWHERE MAN.

Why is it that the more intelligent viewers of the idiot box are left with dribble, such as reality shows?

I for one will severely limit what I watch on the FOX network. Why should anyone invest there time, when FOX feels that your time is worthless.

Goodbye FOX, your NOT worth my time!

Graham Kelton was the shows life blood. He was the best part of Vanished.

When he died, the show fell to pieces.

Well this was bullsh*t. I live in Canada, and I’ve been so hooked on Vanished, but now I can’t see the last few episodes?!? What kind of way to run a broadcasting company is this? Fox sucks big time

Who are the idiots that run Fox and are making these decisions? They should be fired I thought this was a good show and what does Fox do they cancell it and let the other s**t showes on. Then Fox doesn’t have the balls to tell us that they cancelled it. They tell you we will be back in two weeks WELL they have come and gone and we can’t find it I had to go through hell and high water to find out that it was cancelled well Fox if you treat your viewers that way then forget me… Read more »

I am a Law and Order fan, But I fell in Love with Justice, Please don’t cancel, at the least put it on cable or the last episodes on DVD

I am getting to the point where I don’t want to commit my time to any TV show because they just randomly cancel them and leave shows unresolved and their viewers hanging; often not even knowing the show was cancelled. This happened with Vanished, Commander in Chief and Invasion to name a few. I’m done!

This was a good show. They needed to give it a season at least and not have killed Agent Kelton. Big mistake. It is too bad, because it was one of the better shows on Fox.

I am really upset that this show has been cancelled. I don’t hardly ever watch T. V., but really enjoyed this one