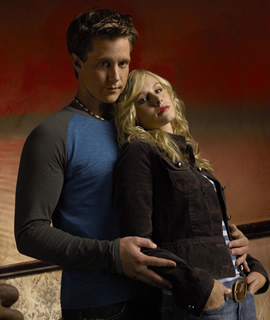 I say make the movie! I think they owe it to us, there is no end to the show and that is really upsetting. I actually cried when I saw the last episode because I didn’t want to believe that it was the end. This show is one of the best and it should be worth while to make it a movie or another season. Whatever takes to at least end it the way it should have ended.

I am desperate for more Veronica Mars. Go movie go! This show is incredibly well written and the cast just runs with it. I am 36 (when the hell did that happen?) and still find it compelling, insightful and entertaining despite the high school/college setting. It speaks to my past, present and future and I would love to see more. Make it happen Hollywood!

im here in new zealand and i am dying to have an ending to this TV series thats got me hooked…!!!!!

i just started watching it again because i’d miss an episode… got the whole season, 1 2 & 3.

just starting off with season 3 but im guessing it will be an unfinished ending… please Rob, we’re so hooked on this amazing tv series that i think we all need an ending, a good one. please!

I think it’s too late now. I don’t see it happenning.
Miss my season1-veronica.

I agree with Missingmars: TV Movie, straight-to-DVD, full-length feature film, miniseries – WHATEVER. I would absolutely love to see one last VM story, in any form.

I just started watching and am totally hooked on the series – bought the boxed set and am anxiously awaiting season 3. Closure would be really really nice…would prefer a movie to comics, but I’ll take what I can get 🙂

Mars is not my cut of tea, I’d rather see FLASH POINT. Please keep it on the air and on DVD for the fans.
Blessing, Cynthia

Seriously. Straight to DVD movie-TV movie-WHATEVER! Have Rob flush out his treatment and let’s get it made!!!

I just LOVE it. I Went complitly crazy when it stoped. I really want the movie to come out of that they continue the series. It’s my favorite series !
Please make the movie ! xx

Nadine…. lol i think the same if a won the lottery i finance the movie i’m sure the all the fans goes to see!!!! in the facebook is a group to support the that produce the movie!

i hope that make the movie the fans needs a ending

This alongside Lost are my favourite TV shows ever made. The show should have ran for at least 5 seasons, and ended way too early. No matter what people say about the ratings they were consistent which proved that anybody who watched the show recognised how great it was. I think they should try and re show them for a new audience, but if anything else were to be made it would actually make my life. I’m from the UK and it was given a poor slot on a non terrestrial channel but I watched it religiously. PLEASE MAKE A… Read more »

I still have my fingers crossed that this movie gets made. The show had it all, amazing story lines and a great cast. If you haven’t seen it I suggest watching season 1 in sequence. You will not be disappointed.