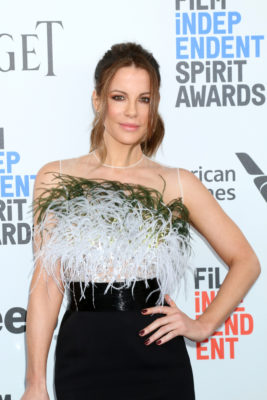 Kate Beckinsale is coming to Amazon. Recently, the streaming service announced the Underworld star has joined their upcoming TV show The Widow.

From Harry and Jack Williams, the drama “follows Georgia Wells (Beckinsale) who has cut herself off from her previous life and is no longer the woman she once was. After seeing her “late” husband on the news, she is pulled back to face the world and will stop at nothing until she gets the truth about her past.”

Prime Video has ordered eight episodes of The Widow. No premiere date has been announced yet.

SEATTLE–(BUSINESS WIRE)–Jan. 3, 2018– (NASDAQ: AMZN)—Amazon Prime Video and ITV today announced it has greenlit The Widow, an eight-episode Prime Original and ITV series, starring Kate Beckinsale (The Aviator, Love & Friendship). Written and executive produced by Harry and Jack Williams (The Missing, Fleabag) and produced by Williams’ Two Brothers Pictures, The Widow follows Georgia Wells (Beckinsale) who has cut herself off from her previous life and is no longer the woman she once was. After seeing her “late” husband on the news, she is pulled back to face the world and will stop at nothing until she gets the truth about her past. This emotionally gut-wrenching thriller will take Georgia into the depths of the African Congo where danger and revelation will greet her at every turn.

The Widow will be produced by Eliza Mellor (Liar, The Living and the Dead, Poldark), directed by Sam Donovan (Humans, Liar, Utopia) and Olly Blackburn (Donkey Punch, Glue), and distributed globally by all3media International. The series will commence production this month in South Africa, Wales and Rotterdam. The Widow will premiere on ITV in the UK and on Prime Video in the US and more than 200 countries and territories.

“We are thrilled to continue our existing relationship with Kate Beckinsale on the heels of her incredible performances in Amazon Studios’ critically acclaimed films,” said Brad Beale, Vice President, Worldwide TV Content Acquisition, Amazon Prime Video. “Harry and Jack Williams have created a powerful story, which will be brought to life by one of the world’s most talented actresses, and we are excited to bring this thrilling series to Prime members around the world.”

“I’m delighted to announce Kate Beckinsale’s casting in The Widow,” said ITV’s Head of Drama Polly Hill. “She is perfect for the role of Georgia in what is, as always, brilliant, compelling and surprising storytelling from Harry and Jack Williams. We’re very pleased to have secured the series which is an ITV original commission and co-production with Amazon.”

“Kate Beckinsale is a brilliantly talented actress and we’re thrilled she’s joining us on this journey – we couldn’t imagine anyone more perfect for the role,” added Harry and Jack Williams. “The Widow is our most ambitious and cinematic piece to date and we can’t wait to bring the dark heart of the Congolese jungle to the screen.”

Kate Beckinsale has proven to be one of the industry’s most versatile and charismatic performers. Beckinsale recently wrapped production on Farming, the directorial debut from Nigerian-British writer-director Adewale Akinnuoye-Agbaje, opposite Damson Idris and Gugu Mbatha-Raw. She most recently starred in the Marc Webb drama The Only Living Boy in New York opposite Jeff Bridges, Callum Turner, and Kiersey Clemons, which was released by Amazon Studios on August 11. Prior to that, she starred in Amazon Studios’ comedy Love & Friendship, directed by Whit Stillman and based on Jane Austen’s novel Lady Susan, for which she won the Evening Standard Award, the London Film Critics Circle Award and was nominated for a Critics’ Choice Award for her performance. She is also known for her starring role in Martin Scorsese’s The Aviator.

Harry and Jack Williams began their writing partnership in 2007 with the BBC2 sitcom Roman’s Empire, starring Mathew Horne and Chris O’Dowd. The show was subsequently piloted for American television, with Kelsey Grammer in the lead. For the UK they wrote and produced pilots and series including TheAmazing Dermot, Bamboo, Full English and The Guardians (which they also directed). In 2014, Harry and Jack wrote and executive produced BBC1’s Golden Globe and Emmy nominated drama The Missing. The series, which starred James Nesbitt, was also nominated for four BAFTAs, including Best Drama. Since setting up Two Brothers Pictures in 2014, Harry and Jack have produced shows for Amazon, HBO, AMC, BBC, ITV and Sky, including the award-winning hit comedy Fleabag.

The Widow will be available on Prime Video to stream and Prime members can also download the series to mobile devices for offline viewing at no additional cost to their membership. The series will be available in more than 200 countries and territories for Prime members to watch via the Prime Video app for popular smart TVs, Fire TV, Fire Tablets and Android and iOS phones and tablets. Customers who are not already Prime members can sign up for a free 30-day trial at amazon.com/prime. For a list of all Amazon Video compatible devices, visit www.amazon.com/howtostream.”

What do you think? Are you a fan of Kate Beckinsale? Will you watch The Widow?

The widow is an amazing series! Hoping there are more seasons to come.

Agree~~~this series captured my interest, for sure. Wish there had been more episodes.