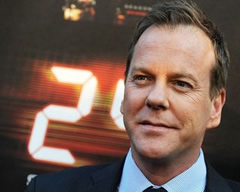 As much as I love Jack Bauer, I think it’s time for him to move on. The show can’t go on forever. Give him one more season and maybe a mini episode ( less than 24 hours) and send him off in grand style (perhaps a peaceful retirement as a college professor or a corporate director of security)

Anything else would eleveate him to “comic book hero” status.

24 is a very good drama, but it can’t go on forever. Whether it’s one more season or two, it has to end at some point — and better it should end strong with a good plot that compares well to previous seasons. That said, no network ever wants to spend enough on good programming if it can help it; Fox’s desire to produce cheaper programs is totally in character for them. It’s a fatal flaw, but I don’t expect the Fox execs will ever see it that way. I’ll be happy to watch another season or two of Jack… Read more »

24 gone? no its just not something i want to think about!

Please dont end this show. i am so emotionally attached to it that u end it u end me. Please i beg u let Jack Bauer continue..Thanks

Sorry, Fox got me so upset, I meant Saving Grace!

Wow, does my day get any worse, first Amazing Grace, now 24… Fox needs to get a clue, a very big clue and very soon. This is ridiculous. Maybe I will just not watch anything new they come out with, I wouldn’t want to get attached to something else good and have them decide, oh we don’t want to pay for it anymore. I feel duped!

It seemed to me that it still has a couple more seasons to crank out after the eighth. There’s seriously a lot of things Jack and CTU and all our heroes haven’t done yet.

John, are you serious? The 24 movie, as I understand it, will be two hours long, covering a 24-hour day, the second hour of it being the last, in real-time. Odd, eh?

How can anyone watch a 24 hour movie??

24: Redemption did a good job of showing one day go by over the course of like 90 something minutes. A theatrical film could be a little over two hours long which is more than enough time to have a long compelling film.

I do hope they make a season 9 though. Season 6 sucked but Season 7 was an EXTREMELY fresh start for the show. I’m really looking forward to seeing what’s planned next

I would pay to see and 24 in the theater. But why stop there this would just blow up the show even more. Everyone would want to continue watching this on TV.

It’s bad enough that I have to deal with the fact that “Lost” in 2010 will be ending for good but to have “24” just go…you guys have to do a movie now…PLEASE! You just can’t end it like this.

I would love to see 24 on the big screen, and that the movie marks the end for the show.*