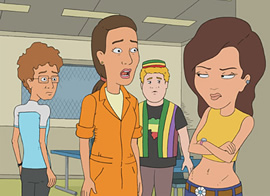 The Goode Family is an animated series from King of the Hill’s Mike Judge, David Krinsky, and John Altschuler. Featuring the voice talents of Judge, Brian Doyle Murray, Dave Herman, Linda Cardellini, and Nancy Carell, the sitcom follows a working-class family who, despite their best efforts, find it difficult to live politically-correct lives.

Surviving Suburbia stars Bob Saget as a father who lives in a typical suburban household but can’t seem to find much that makes him happy. Castmembers of the sitcom also include Cynthia Stevenson, Jared Kusnitz, G. Hannelius, Jere Burns, Dan Cortese, Lorna Scott, and Lyndsey Jolly.

Both series have had disappointing runs on ABC. Goode Family debuted to a disappointing 3.93 million viewers and a 1.6/5 in the 18-49 demo. The network shifted it to Friday nights after three airings and the numbers nosedived to a series low of just 1.09 million and a 0.3/1.

Meanwhile, Surviving Suburbia brought in solid numbers when it followed popular Dancing with the Stars. The show’s debut attracted 12.16 million viewers and a 3.2/8 rating/share. Once Dancing with the Stars was over however, the sitcom’s audience declined considerably — to a terrible 2.83 million and a 1.0/3. The network shifted Saget and company to Friday nights and the numbers have dipped to 2.23 million and a 0.5/2 in the 18-49 demographic.

Last night marked the season finales of both series. While few expected that ABC would give either a sophomore run, it’s rare for a network executive to actually admit when shows are finished. According to The Futon Critic, McPherson laid the shows to rest today, saying that neither would be back.

What do you think? Are you disappointed that neither will be returning or, should ABC have pulled them long ago?

ABC is just not a good channel for an animated show. Judge needs to either go back to Fox, or work up a deal to do something on Comedy Central or Cartoon Network’s Adult Swim.

Awww Man! I really liked watching The Goode Family. Please bring it back!!!!!

That sucks, surviving suburbia was hilarious! Seinfeld didn’t do so hot in the ratings its first year, and it came back to be one of the most popular tv shows on tv. I was hoping the same thing would happen with surviving suburbia. 🙁

I loved THE GOODE FAMILY. I want more!!!!!!! Please dont give up, it is an amazing animated show. Be back, I expect to see more funny stories of eco-crazed family! Sometimes I see myself in them when I go to my eco-store, haha..

I’m going to miss the Goode Family. I watched every episode and there are zero other shows I watch on television religiously. I used to watch Jay Leno once every now and then, and I stopped when Conan O’Brien took over. Talentless fop.

Bliss Goode was the closest portrayal of today’s teenager I have ever seen on television. She’s constantly texting and ignoring everyone else. So typical. Mike Judge is an excellent observer of current trends and events.

Take it to Fox, Mike! Don’t let this one die!