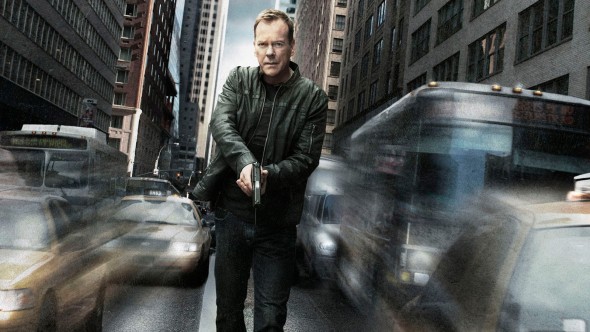 Is there another 24 spin-off in the works? Deadline reports FOX is developing a prequel to the Kiefer Sutherland TV show.

The original series stars Sutherland as Jack Bauer, a counter-terrorism agent who races against the clock to thwart attacks against the U.S. The cast also includes Mary Lynn Rajskub, Elisha Cuthbert, Dennis Haysbert, Carlos Bernard, and Kim Raver. The show ran for eight seasons plus one special (Redemption) and a limited series, Live Another Day.

Even though FOX’s reboot series, 24: Legacy, was cancelled after one season, the network is trying again. This time around, 24 executive producers Howard Gordon, Joel Surnow, and Bob Cochran are developing a new prequel series that would explore the early life of Jack Bauer.

Little has been revealed about the spin-off series, but FOX chief Dana Walden says the network is “very excited about where the show would go.”

What do you think? Are you a fan of the original 24 series? Would you watch a prequel?

I would love the return of the show, but I too would like it to start with him coming back from Russia. Kiefer Sutherland was an amazing actor in this series and I was sad when it ended. Please bring back

Noooo, we need to see Jack get away from the Russians then go from there, maybe him trying to bring them down for the assassinations etc..!!

I loved that series and can’t wait for it to restart. It was AMAZING.

Who will play Jack? It all depends on who is Jack??

Totally agree! Depends who will be Jack.