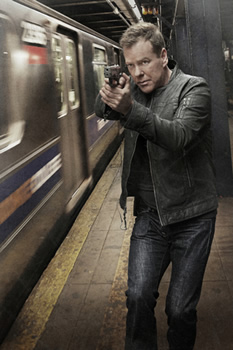 24 is a fantastic show, just finished the last season and now…… Bring Jack back!

[…] Sutherland, is not a happy man. Apparently 20th Century Fox has cancelled plans to start filming a movie version of the 24 TV series next […]

I think it should begin showing excerpts from the final few episodes, then go from there however they wish to write it. It just needs a better ending than the final episode depicted. I guess I don’t like cliff hangers!

I really dont care if there is real time or not, PLEASE just bring 24 back either to the movie screen or another tv series would really be fantastic. My family and I are HUGE fans of Jack Bauer and wished the tv series was never cancelled. PLEASE PLEASE PLEASE bring Jack back!!!!

they shouldbring back tony almedia

I have never in my life seen a miracle like 24,well to me the film is a miracle because i have never seen a thing like this.i luv 24 and most especially habib marwan,president palma,jack bauer,tony,chloe and dubaku……………….i luv 24!

24! 24! 24!!! The series will live forever in my mind. Not only the first ever real time show, but the first series to have a different cast, excluding Keifer, each year. I mean seriously, the beginning of season 5 was the most shocking, jaw-dropping heart breaking sequence I have ever seen in any show or movie. To have the beloved President Palmer shot and killed within the first few minutes AND the two other fan favs Michelle and Tony blown up(thou he made it), no other show or movie would tread near that. To build the characters up through… Read more »

I love 24 it is one the movies that has done my day. Whenever i could start watchinng it i could not move my single body coz its so entertaining. What i think, you should consider adding on more seasons coz Jack also deserves a better ending. For sure consider a 8th season and more.

I think that there can be a compromise to the whole real time dilemma. Design the movie so that it is two hours long, but only have events occur in real time within each hour. This way, you keep the suspense of the ticking clock etc. but you can skip a few hours (maybe even a day) between the two hours. The problem with redemption was that you didn’t do this and it just made it feel like a two hour season premiere and not a movie.

I love 24 is one of the only tv shows i can watch. But i think the whole 24 saga needs a better ending, Jack needs one more day. I dont think the whole real time thing will work but there has to be other ways to make this movie work. Hollywood is going down hill thery are making remakes of old tv shows which is well all but im a young guy and i think the 24 movie would do great at the box office. Kiefer has done a great job with the show and what ever yall decide… Read more »

I read a suggestion from people involved with the show, that the first hour or so could be standard movie time. taking place over days or weeks-months. but the last hour could be real time. Would have to be done right, but I think this would be pretty cool.

This is defenitly one of the besgt shows I have ever seen they need a diffrent ending though. The show let everyone off thinking what would happend next like it aLways does wich is good if u contuie it,, but if it ends therfe needs to be a finally movie or one more day and end it on a exallent note. I agree let jack be happy would be nice to help miliatry personal have hopes.

i think that 24 is the best show i have ever seen in my entire life it is the most thrilling show ever…when season eight ended I couldn’t believe that it was over. I can not wait until the movie comes out it will be so awesome. Honestly real time would be great but whatever works to make the movie.