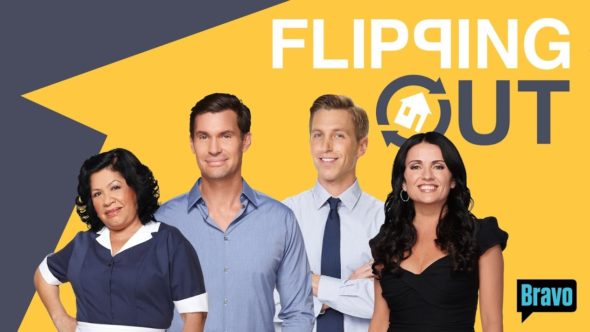 Flipping Out is back in action. Today, Bravo announced the TV show’s 11th season will premiere in September.

The long-running reality series follows house-flipper Jeff Lewis and his team as they renovate properties for resale. The new season taking on less responsibility as he focuses on his family.

Season 11 of Flipping Out premieres on Bravo on September 11th at 10 p.m. ET/PT.

EW YORK – July 31, 2018 – Bravo Media’s Emmy-nominated “Flipping Out” returns for its eleventh season beginning Tuesday, September 11 at 10pm ET/PT. As a new-ish father, America’s favorite house-flipper Jeff Lewis finds himself in uncharted territory and needing to refocus his energies. Now that his family takes priority, his goals are to take on fewer clients and flip properties more efficiently. With the employee revolving door constantly in flux, however, restructuring is easier said than done. As pressures rise and tempers flare, Jeff leans on his partner Gage Edward and executive assistant Jenni Pulos to help him keep it all together.

With little Monroe now calling the shots in her fathers’ lives, the Lewis-Edward household – and thus the staff at Jeff Lewis Design – operates on an extremely regimented schedule. Jeff remains consumed by the still-ongoing renovations at his Valley Vista property and brings in two project managers to help keep things on track. Things get complicated, however, when his game plan backfires. Having just gotten back from maternity leave, Jenni navigates the new office dynamic amidst the chaos as newest team member, Tyler Meyerkorth, has become Jeff’s full-time assistant and right-hand man in her absence. Diligent long-time employee Megan Weaver works to pick up the slack, but tension builds as Jeff struggles to relinquish control. As employees fail to perform up to his perfectionist standards, it becomes clear that no one is safe and the threat of being let go looms.

What do you think? Do you watch Flipping Out? Are you excited for the new season?

Love this show. And can design my AZ home

This is the best show I watch. Record it if I’m going to be working. Absolutely my favorite all of them.

I absolutely love this show. If I’m going to be at work late I make sure to record it. It’s great! Everything about the show.

If they take Flipping Out off, I won’t be watching the channel. It’s the only thing I watch on Bravo.

It is outrageous that Bravo discriminates against this show in my opinion. House wife of Atlanta have shown mental abuse on the show Nene against Kim I could go on and on yet because some one is jealous because she is not getting the attention she use to now she is abused really !!! they want to cancel the show.. as soon has that happens let’s see how many people we can get to stop watching Bravo

I agree, HW Atanta, HW of NJ has shown mental and physical abuse and are still going strong. HW of NJ cast has even went to prison and was warded not only with a slap on the wrist by our ststem, they where also able to continue on their show. I understand Jenni being upset and I think she should have been given her position back. But I don’t think she has been abused any more than if she was the first season she started working with him. I think he should been made to give her job back. I… Read more »

I love flipping out and I heard it was canceled ? I really hope not it’s my favorite.

Brovo just keeps getting things wrong. They keep people on like NeNe put cancel a awsome show like flipping out. I like Jenny but shame on her she left and was no longer full time and didn’t like that she wasn’t as important you could see her reaction on her face when jeff said he would have to promote her to something else.. Bravo is now disgusting and if the cancel the show because someone got BUT hurt and was fine with it for over ten years then it’s Bull _ _ _ T..

Absolutely love love love Flipping Out and have season all 10 seasons episodes at least 3 times!!