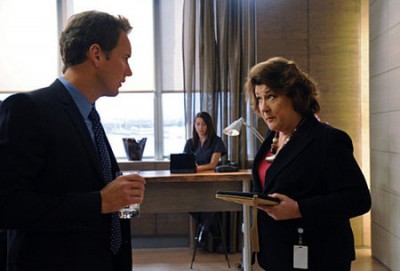 Patrick Wilson and company won’t be back for a second season. CBS has cancelled A Gifted Man, their low-rated Friday night drama.

The TV series got off to an unimpressive start back in September, registering a 1.4 rating in the all-important 18-49 demographic with 9.45 million total viewers. In week two, the demo fell 14%, to a 1.2 rating.

The numbers for later episodes fluctuated up and down — even occasionally outperforming the series premiere — but were never very strong. For the show’s final few episodes, CBS moved it into the 9pm timeslot but it didn’t do as well as previous timeslot occupant CSI: NY.

The last episode of the season (and series aired) on March 2nd and was Gifted Man’s best overall series performance, registering a 1.5 in the demo with 9.70 million total viewers. On our CBS Ratings Report Card, which measures the relaive success of shows on the network, A Gifted Man had a “D-” rating right from the start.

What do you think? Are you sorry to hear that Gifted Man won’t be back for a second season? Why do you think this series didn’t catch on? Did you like or dislike the “supernatural” aspect of the series?

I really enjoyed watching this show, and I am upset that it got cancelled. I don’t think they gave it a real chance. This was the only CBS show I have liked.

Can’t believe CBS would cancel a show that received over 9 million viewers each and every week. I think its ridiculous. Maybe if they actually promoted the show like they do with any of their CSI shows or Hawaii Five O then they would get better “ratings”. The show is brilliant and definitely a favourite of mine. The cancellation of a good quality show leaves a bitter taste in my mouth. So disappointed. A lot of fans are going to be extremely upset.

Very sad! I loved that show, excellent staff and was well written, will be sorely missed 🙁

Wow, this is sad. I loved that show. Good writing, Excellent cast. Where do these numbers come from anyway? I’m in that age demographic and I loved it.

I don’t know why you people would even consider “A Gifted Man” a show that you feel needs to be cancelled. Don’t we have enough cop shows. Also CSI programs seem to be overflowing. Even though they might get higher ratings. I think you need a better writer for the show. With the cast that AGM had the storylines could be endless. I think I could have done a better job writing the scripts, although there was good writing on the show to the end. It was one of our favorite shows at my house. It is obvious that CBS… Read more »

Why is it that the network bigwads constantly say if the ratings are good any show will succeed. How can a show that has 9 million people watching it be a failure. Who the hell cares if the “all too important” 18-49 demographic watches any particular tv show. What because the ads they air during the show is geared towards that demographic? What a bunch of horses ass!!! Why would you even produce a tv show that is intellectual as this one was if you know that your precious demographic would never be interested in such a show. Come on… Read more »

I love this show. So disappointed to see it cancelled. I think they should of given it a chance. I’m in the demographic that is targeted and I would have loved another season to get to know the characters more. I think there were so many more stories to tell.

Yeah….definitely disappointed. I think the promotion for the premiere was what let it down to begin with; It looked like a poor mans Medium. BUT after I watched it I was pleasantly surprised and was very impressed by Michael Holt. I really enjoy this show nad do enjoy watching it every week. It will be sorely missed and I would love to see a different network pick it up. Far more original then another reality tv or cop show and is even quite different form any other medical show. Breath of fresh air. They dared to be different and original… Read more »

I was so upset to hear that CBS canceled AGM it’s so not fair what a great drama but I want to wait intill CBS tells us wants been renewed and caneled but maybe CBS will ship it to another network I found myself wanting more when it ended  I’m still praying that someone will want A Gifted Man it’s a great medical drama I’m going to miss this show.

Wow that sucks. Can’t keep scripted shows but I can always depend on seeing Survivor or Big Brother, huh?

Yes, the ratings for ‘the demographic’ were low, but what about the total viewership??? IIRC, the show always had the most viewers for its timeslot, often double the number of any other show at that time. Is the 18-49 demographic really so important in advertising? What about all of us retirees who actually have a pension–we probably have more disposable cash than younger people who are scrambling to find jobs. As far as the storyline, I agree that the dead wife couldn’t really be maintained (unless they turned it into a comedy like the old Topper show)–either Michael learned his… Read more »

Loved this show. Yeah, the seeing the dead wife bit was a bit hokey, but aside from that the rest of the cast was great and always had a good message at the end. How sad we lose out to a cheaper-to-produce reality (scripted!) show. Someone needs to step up and realize the current ratings system that determines if shows succeed or not (remember, it is all about selling ads) is antiquated and needs to be rethought.

first time we get a good show on cbs they cancel it. this was a show that my husband and i looked forward to watching every friday night. some of those reality shows should be cancelled and yet you cancel a decent tv show.

Isn’t 9 million viewers an episode good? Who cares about the demographic as long as the viewers are there?

Thanks to CBS for at least giving the show a second chance by ordering a few more episodes.