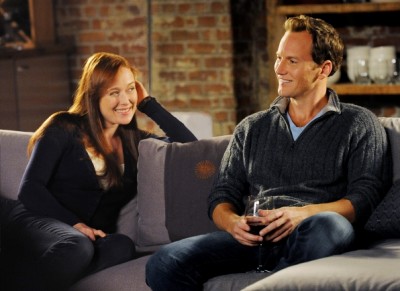 TV show description:
Michael Holt (Patrick Wilson) is a gifted and very successful NY surgeon. He’s wrapped up in his materialistic world and he only takes care of clients who can afford him, the powerful and the wealthy. Though Michael has many things, he doesn’t exactly have much of a bedside manner. He’s also at that point in his life when he’s wondering if he made the right choices.

He bumps into his ex-wife Anna (Jennifer Ehle), a kind and beautiful physician — the love of his life — who he divorced a decade earlier. He lights up in spite of himself and the two have dinner together.

Michael has an offbeat sister, Christina (Julie Benz), who’s trying to keep things together for her teenage son, Milo (Liam Aiken). She’s thrilled that Michael has gotten together with Anna, saying, “When you were with her, is the only time you weren’t a total jerk.”

Michael later learns that, some time ago, Anna had been hit by an automobile and killed. She’s left behind a Bronx clinic that provides medical care to hundreds of people who couldn’t afford care otherwise. She appears to Michael again and even Michael’s efficient and overworked assistant, Rita (Margo Martindale), notices a change in him.

Anna asks him to visit the clinic to share her computer’s password with the staff. Visiting the clinic is like going to a different world for the upscale doctor. While there, Michael meets Autumn (Afton Williamson), a volunteer carrying on Anna’s work with the underprivileged. Seeing her compassion in action, Michael’s attitude toward serving the rich and poor is turned upside down, and he begins to see that there’s room in his life for everyone.

Series Finale:
Episode 16 — In Case of Heart Failure
While attending an awards banquet, Michael reconnects with his old friend Gene – a photographer who recently found love while abroad in India. When Gene collapses on stage, Michael takes him back to Holt for treatment. As Michael struggles to find the source of Gene’s worsening fever, his new girlfriend butts heads with his overbearing but well-meaning mother as both women attempt to comfort the man they love.

At the clinic, a young woman with a broken toe reveals that her life was saved by a heart transplant six months ago. While tracking down her medical records, Kate learns something remarkable: the heart used to belong to Anna Paul. When the broken bone causes Fat Embolism Syndrome, a potentially fatal disease, it’s up to Michael to rush the patient back to Holt Neuro in order to save her life.
First aired: March 2, 2012.

I agree that it was a great series. My husband and I lucked upon it and were sad to see it end.

This show was fantastic, I never even knew about it when it was on and sort of stumbled upon it on Amazon video. If the show wasn’t in the dreaded Friday night slot, it may have had more viewers. So sorry it got cancelled, it was unique and the actors were excellent.

Totally agree, Terrific writing, cast, uniqueness and I will miss it. Sorry it was on Friday PM which probably precluded its watchability. Fantastic show.

I loved the show can’t believe it’s cancelled there is another one called pure genius just started but I don’t think it’s as good as a gifted man. But what can I do about it. Just be little sad I guess.

I’ve enjoyed this show a great deal, the story line is awesome and to find out it will not continue is disappointing due to the fact that the story still needs to explain why his wife still appears to him. I prefer to watch this show instead of reality shows knowing other peoples business. Normally the show gives a normal life style of people on a day to day basis. This show should go back on from the beginning to get to the ending. I would buy this dvd. The writer should take it to another network that could bring… Read more »

Betty…you’re kidding..right? Anna Paul returned to make sure that her clinic would carry on..and she needed Mike to not only put in the password she always used “MYMIKE” but to find another head of the clinic (which Zeke could have done unless he was gone too often playing with his band,).

ALSO Anna wanted to see her ex be better at caring for ALL patients rich or poor. For the first time he is surrounded by people who like him and he likes in return…she wants Mike to be happy in addition to keeping the clinic going.

I can’ t believe that such a successful show is cancelled !!! This is a great mistake !!!! Please bring it back!!! I loved characters, the plot. It is so real, so emotional. Hope it is not too late to start again . Renew it!!!!

Doesn’t matter how many exclamation points you type, Patrick Wilson is NOT returning. He said that he was glad it was over.

Patrick has an ego bigger than the character he played. Wins Tony award for Musical, stars in films, married to a GORGEOUS woman (also an actor) and has two kids.

He’s NOT coming back.

We loved the TV Show and was very disappointed when it was canceled… Why did the Suits at CBS pull the plug on a good decent interesting show. How do you really know who watches what???? You keep the cheap trashy sex shows on and get rid of decent shows.. We loved the Characters and the story line.. The Actors and Actresses were great and very believable.. I’m so disappointed in your decision . I watched every episode on Netflix and wanted more.. Very disappointed in CBS. Loretta Smith

This was a brilliant show, I really really wish it was never cancelled in the first place. If there is a chance to renew it PLEASE do it, I believe it sends a message to people. I know it is all fiction but it is all about things that could really happen in life and makes a person appreciate what he/she has and not moan about what we could have. Sorry, I guess I realy miss this program I watched it 3 times up to now and I’m sure I will watch it again.

Why is it whenever we have a halfway decent show some smarty pants pulls the plug?
Too nice, not enough sex and violence, watch the 11pm news, that should fill your quota for the month. You TV exec. are mean and greedy!

Please bring back the show, A Gifted Man. It was so good. It made me laugh. It made me cry. It stirred my emotions. I looked forward to watching it every week. I agree with all the other viewers. Good shows get cancelled before they are given a chance to attract a large audience, but “reality” shows are kept on the air forever. A Gifted Man was good heartfelt entertainment which is what we need more of. I live reality. I don’t need to spend my evenings watching it on television. The evening news is more than enough reality for… Read more »

PLEASE BRING BACK A GIFTED MAN!!!! If not back on CBS put it on Netflix!!!

Honey Boo Boo and crap like that, the networks will air…

A show with heart, substance, spirituality and ethics they won’t…

What a world we live in, huh?

After I discovered this series on Netflix, I was thrilled to find a really good series, and I wanted more! Again, disappointment! Another good series bites the dust! Why? What is wrong with the so-called powers-that-be? It seems like any top-notch show, whether I find it by browsing Netflix or Hulu, is a series that caught the proverbial axe! I enjoyed this show immensely! Why not give it another shot CBS? Maybe another network? This show is definitely worth another try, a different time slot, a different network. The fan base for this show already exists, as demonstrated by these… Read more »

I love the show! I feel so sad when I heard that the show was canceled. I just want to remind you guys that this show has a huge amount of audiences not only in USA but also in Asia. As an asian, I really hope to renew the show.