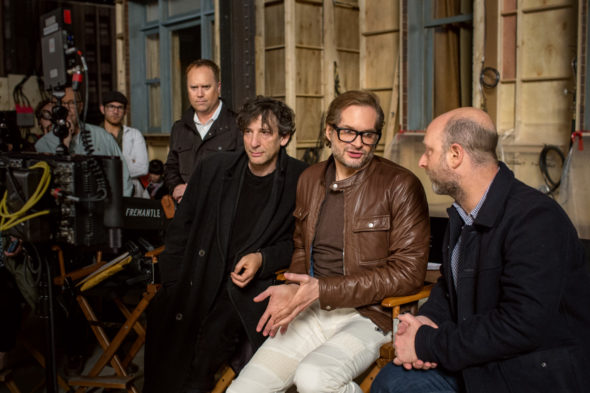 Although it was renewed for season two, back in May, is the American Gods TV show in danger of being cancelled before its second season on Starz? Showrunners Bryan Fuller and Michael Green have exited, and the series is in need of someone to replace them, but it seems there may also be budget concerns.

The supernatural series, based on the Neil Gaiman 2001 novel of the same name, is produced by FremantleMedia, who reportedly have shown Fuller and Green the door over budget and creative direction disputes. This comes a year after Fuller left his role as showrunner on CBS All Access‘s Star Trek: Discovery due to delays in production.

The news, of course, puts the future of American Gods in jeopardy. While a new showrunner will more than likely be sought, time will tell how that will affect the look and feel of the visually impressive series.

Fuller and Green created the adaptation of Neil Gaiman’s 2001 award-winning novel and served as executive producers/showrunners on the show, which debuted this past spring and earned a quick Season 2 renewal. We’ve learned that more than half of the scripts for Season 2, which had been targeting a mid-2018 premiere, have been written. Search is underway for a new showrunner. There has been talk about Gaiman possibly coming on board as a co-showrunner but that is in flux as he also has series Good Omens for Prime Video. (He confirmed on Twitter that he is focused on his Good Omens showrunner duties and won’t be joining American Gods.)

No one is addressing the reasons behind Green and Fuller’s exit, but we hear that the split may have been over the series’ budget. There had been talk that the budget for first season of the ambitious production had ballooned to Game of Thrones levels. We hear series producer FremantleMedia North America, under new scripted chief Dante di Loreto, tried to impose big budget cuts for the 10-episode second season, which led to the showrunner change.

As Deadline notes above, Gaiman has debunked the idea that he’ll take the reins as showrunner for American Gods season two. Check out his tweet.


No, it's not true at all. I'm showrunning Good Omens in the UK until next year, then retiring from showrunning and going back to writing novels for a living. https://t.co/nsmx7OkLzK

What do you think? Do you think Starz will reverse its renewal and cancel American Gods season two? Should it be cancelled or renewed? Let us know, below.