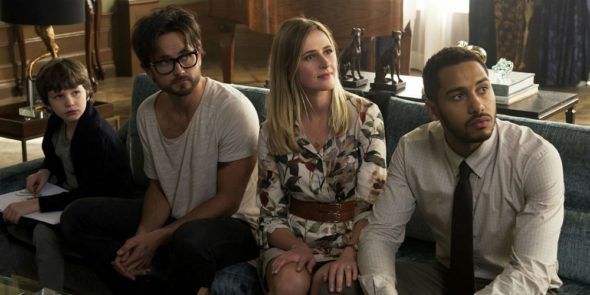 What’s next for American Gothic? Earlier, showrunner Corinne Brinkerhoff spoke with The Wrap about the future of the CBS series.

In the interview, Brinkerhoff revealed she has a master plan:

I had a plan when I pitched the show, and it stayed pretty close to that. But when we sat down in the writers’ room, we made a master plan of what would happen over the course of the first season. So we would be able to build towards the final answer and put in little hints and teases along the way.”

The showrunner added that the season one finale will be satisfying:

There will be resolution, yes. You’ll get all the answers. That was something we made sure of early on, this is kind of like your summer novel, in TV form. So you get an answer.  I wanted there to be one satisfying story, and then figure out how to pivot to Season 2. That’s the fun part.”

And while CBS has not renewed American Gothic yet, Brinkerhoff says she has plans for future seasons:

Yeah, when I pitched it, it was that the first five or six seasons would be the same general idea, but each season would be a different family, different setting, different mystery. So it will explore similar themes and be very character-based. That’s the creative ideal for all of us … the same universe, same playground, but to completely reinvent the family and the story, which we can do over and over again.”

The two-part season one finale of American Gothic airs on September 7th.

What do you think? Are you watching American Gothic? Do you think it should be renewed?

We anxiously waited each week to watch it. Recorded it to watch as many times as we wish. And are hopeful there will be a new series. Unfortunately the last ten minutes of the finale we missed!!! Our satillite went out! So we didn’t see the very end. We hope someone else recorded it so we can see it. I can’t find a way to view it on the Internet. We r all for another season. And another me another!!!

You can watch it for free on Amazon Prime Video

This was an awesome series. All the twists and turns keep you on the edge of your seat. Loved that Amazon picked it up so I could watch a couple in a row because you just couldn’t watch just one. The cast did an amazing job! Hoping for a season TWO !

I loved it and definitely want it back!

WE WANT MORE!! I usually am able to figure out the killer by at least half way and I NEVER did!! Absolutely awesome!! My Fiancé and I enjoyed every second!!

Absolutely love the concept of completed stories and beginning a new story next season. It’s Like reading a get book to the end. Your writers, storylines and twists are the best! Please keep it going!

This should go on next season. My wife and I enjoyed the mystery and suspense. We want more! The cast was the best!

I love this show!! Kept me on the edge of my seat. All of the cast did an excellent job playing their parts!! Please please please renew this show.

Absolutely this should continue to season two. Need to find other about the mom and her son. This could be another cult classic

It should be another season. What happen to Jack does he become a serial killer. What about his mom

I think season 1 of American Gothic was excellent. Please renew for a second season!

Please renew this show–a great whodunit. Many twists and turns and interesting characters.