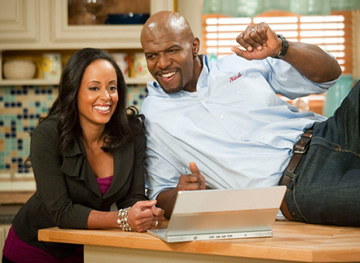 I love the show and the cast.Cant wait for new episodes. I am officially hooked. Thanks Ice Cube.

One of the best shows ever!!! I love, love, love every cast member! Please make more shows like this.

I really like the show. I hope it is coming back with more episodes. I saw Essence in another show and the boy on the Electric Company. So, I’m confused.

i would like to purchase dvd sets of the show. whats the hold up? tyler perry shoots his show dvds out as fast as he can film them. maybe you guys should take note.

When does this come back on? It’s about to be in syndication where I live, but I want new episodes too!!!

While I am here I just want to say hi to Rebecca and Terry Thanks Rebecca for being supportive to Terry. You guys have brought so much joy and love to my family an I. I admire your love for one an other. I would love to meet you guy one day. You know i home school my kids also. Becky I it is hard to sit and be a stay at home wife. But it is all worth it I fill the need to go out an work just to do my own thing all the time an I… Read more »

I am supporting Mr. Crews a huge fan of him his family an his friend the black guy with the good hair bush. Big ups can’t wait to see it.

The good ones without cursing, hair-pulling, and so-called adults acting foolishly seem to be the shows hard to find. Bring Are We There Yet? back!!!

It’s funny how people don’t like something really thing their opinion matter. There are enough people who did like the show apparently that’s why they ordered 90 more episodes. The good thing about it for the people that don’t like it there are a million shows on TV especially if you’re fortunate to afford cable. Every show is not for everybody so pick and choose and whatever you hate about a show know people don’t really care if they like it they are still going to watch it.

When does it come back on though? It seems like it’s been a loooong time!!

This a funny show and i want it to come back. I, really love the story lines and all of the characters!!! PLEASE BRING BACK THE LAUGHTER

I really like the show. It’s a positive outlook on tv.

I absolutely love the cast as well as the show!!!

The best thing about Ice Cube’s new series “Are We There Yet?” is that he’s not acting in it.

Great Great Show TBS made a great decision. Ice Cube has a knack of putting together great people and great story lines. He may not be a Tyler Perry but he does have talent!!!