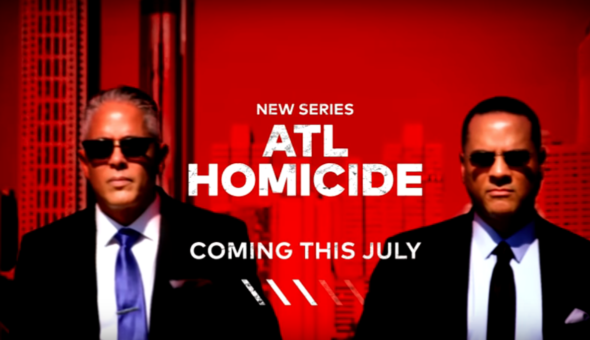 TV One is on the case. This week, the network announced their new TV show ATL Homicide will premiere in July.

Veteran homicide detectives David Quinn and Vince Velazquez of Atlanta PD have stories-and they’re sharing some of the grittiest of them all. As part of the network’s “True Crime Mondays,” ATL Homicide dives into these stories with detectives Quinn and Velazquez as they recount their personal experiences solving these cases, alongside astonishing dramatic re-creations that transport viewers into each case.

Thirty-year Atlanta PD veterans, Quinn and Velazquez have spent fifteen of those years working side by side in the homicide division. Tackling hundreds of cold cases together from everyday ‘who-done-its’ to high-profile murder mysteries and more, the two have a visible, visceral chemistry out in the field – the streets of “Hotlanta” – and have put killer after killer behind bars. ATL Homicide follows the detectives as they search for the truth in an investigation, seeking to deliver justice on behalf of the victims of these often gruesome crimes: “This is not just 9-to-5,” Quinn said. “This thing is three o’clock in the morning…forever!”

“Through each compelling case, audiences will feel like what they are watching unfold is happening in real time,” says Tia A. Smith, Sr. Director of Original Programming & Production. “The blurred line between what’s real versus a re-creation is what really sets this series apart and flips the true crime genre on its head.”

The series places viewers in the front seat of the action, with Quinn and Velazquez guiding each turn as if the investigation is happening in the moment. At the heart of ATL Homicide’s wild, twisting, complex rides, however, there is one clear destination: the truth. “It’s all about the truth,” Quinn says.

Some of the cases the detectives tackle this season are:

The skull of an 11-year-old was found in a field. When Quinn and Velazquez talk with the victim’s grandmother, they learn that the victim’s older brother was heavily involved with street gangs. The search for his killer now leads the detectives into the dangerous world of Atlanta gang violence.

Four days after her husband reported her missing, a woman is found dead in the woods. The victim’s belongings were scattered all around her. A talk with the victim’s husband reveals that the two had a strained and open marriage. Detectives Quinn and Velazquez now have a myriad of potential suspects to probe in order find her killer.

When an U.S. Air Force veteran is found beaten and stabbed to death in his apartment, the crime scene looks like a random robbery gone wrong. The case goes cold and no one expects it to be solved. That is, until the case goes to Quinn and Velazquez. Digging deeper into the victim’s past, the detectives discover that this man’s murder was anything but random.

Things were going great for a 21-year-old former cheerleader, but life came to a screeching halt when her boyfriend came home to find the woman strangled to death just a few feet away from her baby. The boyfriend is now the only suspect, but he swears he didn’t do it. Quinn and Velazquez set out to find the truth and uncover someone from Sparkle’s past who may have wanted the young victim dead.

Found nude and barely clinging to life, a 38-year-old woman died in the ambulance before she could identify her attacker. Detectives Quinn and Velazquez struggle to find the truth, until they try to talk to one man who refuses to invite them into his home and they notice something out of the ordinary in his apartment.

A man is shot and killed while in the process of moving into a new apartment with his wife. Quinn and Velazquez survey the area and find a trail of blood leading away from the murder scene. Quinn figures someone else was hurt and fled. An anonymous tip leads the detectives to a suspect, but when a witness comes forward, the detectives learn that their suspect was not acting alone.

A 40 year-old immigrant was living the American dream, running a successful business, until suddenly, he was violently murdered. The year-long investigation forces Velazquez and Quinn to not only figure out how the victim got himself mixed up with such criminals, but to also take on a notorious band of lawbreakers who will not hesitate to use deadly force on their targets.

ATL Homicide is produced for TV One by Wide Net Productions and Jupiter Entertainment. Executive Producers for Wide Net Productions are Rob Kerr and Sedg Tourison, for Jupiter Entertainment Matt Sprouse and Allison Wallach serve as Executive Producers; Rudolf Fischmann is Supervising Producer. For TV One, Tia A. Smith is the Executive in Charge and Sr. Director of Original Programming and Production, and Robyn Greene Arrington is Interim Head of Original Programming and Production.”

What do you think? Do you watch a lot of true crime shows? Will you watch ATL Homicide?

I really enjoy watching this TV show,the actors portraying the real detectives are so convincing it just feels like your watching the younger versions of them. They solved some very interesting cases during their careers. I hope there are more seasons to come.

I love love love this show! Up there with the best of them! Please bring it on… So awesome fly with it, I am on board!!! Will be looking for you to shake out a new season!!!
ID Junkie…

Cannot wait for the return of Atl